The Apostasy That Wasn't: The Extraordinary Story of the Unbreakable Early Church (Paperback) 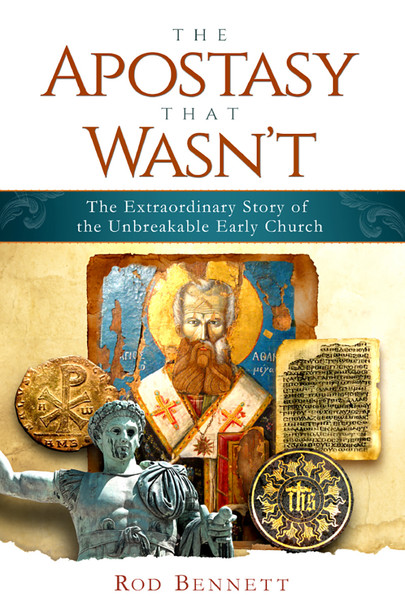 The Apostasy That Wasn't: The Extraordinary Story of the Unbreakable Early Church (Paperback)

The theory goes like this: Just a few centuries after Christ’s death, around the time the Roman Empire converted to Christianity, the true Faith suffered a catastrophic falling-away. The simple truths of the gospel became so obscured by worldliness and pagan idolatry—kicking off the Dark Ages of Catholicism—that Christianity required a complete reboot.

This idea of a “Great Apostasy” is one of the cornerstones of American Protestantism, along with Mormonism, the Jehovah’s Witnesses, and even Islam. Countless millions today profess a faith built on the assumption that the early Church quickly became broken beyond repair, requiring some new prophet or reformer to restore the “pure” teaching of Jesus and the apostles.

This theory is popular… but it’s also fiction.

In The Apostasy that Wasn’t, Rod Bennett follows up his bestseller Four Witnesses with an account of the historical events that led him out of his own belief in apostasy theory and into the Catholic Church. With the touch of a master storyteller, he narrates the drama of the early Church’s fight to preserve Christian orthodoxy intact even as powerful forces try to smash it to pieces.

Amid imperial intrigue, military menace, and bitter theological debate, a hero arises in the form of a homely little monk named Athanasius, who stands against the world to prove that there could never be a Great Apostasy—because Jesus promised his Church would never be broken.

“To read this book is to live in the fourth century, for a vivid moment, knowing the thrills and heroics to which true faith led our ancestors. This is the most enthralling book you'll read this year.”  —Mike Aquilina

$21.95
Now: $19.95
Was: $21.95
What was the early Church like? Contrary to popular belief, Rod Bennett shows there is a reliable way to know. Four ancient Christian writers—four witnesses to early Christianity —left...

$18.95
Now: $16.95
Was: $18.95
Discover the Bible-believing, Jesus-centered, morally pure Christianity of the Middle Ages Superstitious peasants and relic-hawking clergy if this says Medieval Christianity to you, then think again...

Apostles and Their Times

$14.95
Now: $12.95
Was: $14.95
Here's an unflinching look at the lives and sacrifices of those first Christians who were given the task of spreading the Gospel to the ends of the earth. Relying on ancient documents — as...

$19.95
Now: $17.95
Was: $19.95
Tired of being stumped when false claims are made about the Catholic Church? Want to be armed with knowledge that puts these mistruths to rest? In these pages, veteran apologist Gerard Verschuuren...

Now: $13.95
Was: $16.95
When it comes to the history of Christianity, the Catholic Church makes a pretty bold claim: that the earliest Christians were Catholics—and that their beliefs and practices have continued...

$21.95
Now: $19.95
Was: $21.95
What was the early Church like? Contrary to popular belief, Rod Bennett shows there is a reliable way to know. Four ancient Christian writers—four witnesses to early Christianity —left...

Now: $24.95
Was: $29.95
What Did Early Christians Really Believe? The Answer Will Surprise and Amaze You!The Fathers Know Best: Your Essential Guide to the Teachings of the Early Church is a unique resource that introduces...

Now: $21.95
Was:
Are anti-Catholic Myths the original "Fake News"? Anti-Catholics like to paint Church teachings in a way that makes them seem vain, backward, or superstitious, all in the hope of drawing people out...

A Teacher of Strange Things: Who Jesus Was, What He Taught, and Why People Still Follow Him

$16.95
Now: $13.95
Was: $17.95
We’ve grown way too comfortable with the story of Jesus. Nice man, right? Taught us to love one another. Said not to judge people. Tragically killed by his enemies. We celebrate his birthday...

The Decline and Fall of Sacred Scripture

Now: $21.95
Was: $24.95
What is wrong with Scripture scholarship today? Why is it that the last place one should go to study the Bible is a biblical studies program at virtually any university? Why are so many faithful...