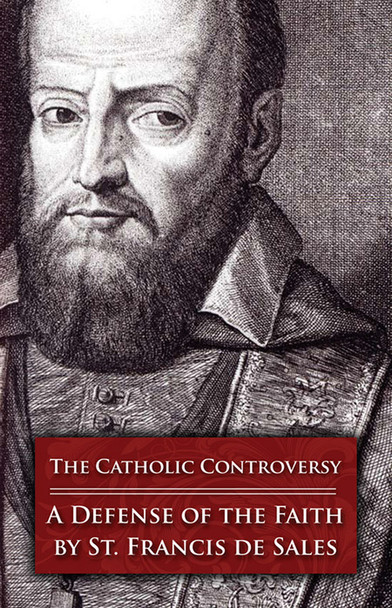 Between 1594 and 1598, a preacher named Francois converted 72,000 Protestants to the Catholic Faith. These are his words.

One of the most remarkable and well-documented events in Catholic history began when a young priest, St. Francis de Sales, volunteered to re-evangelize the Calvinists of the Chablais.

Finding his preaching forcefully rejected, St. Francis de Sales shrewdly switched tactics and began a written apologetics campaign, posting pamphlets on walls and slipping them beneath doors under the cover of night.

His defense of the Faith was so clear and thorough that at the end of four years nearly the entire population of 72,000 had returned to the Catholic Faith!

These powerful little tracts are as relevant today as they were in the late 1500s. St. Francis de Sales draws support from Scripture, the Fathers and Doctors of the Church to address questions still frequently posed by modern Protestants.

Revered as some of the most cogent arguments against Protestantism ever penned; they present a defense of the Catholic Faith that has never been equaled.

Now: $24.95
Was:
The essence of Christianity is this: we hold fast to what we were given by those who came before us. From Jesus and the apostles to believers throughout history, God’s saving revelation has...

Now: $9.99
Was:
Questions relating to salvation -- especially faith versus works, but also penance, purgatory, indulgences, and free cooperation with God's grace -- have been sore points in the dialogue between...

Now: $29.95
Was:
Does intelligent life exist beyond earth?For more than half a century, the question of extraterrestrial intelligence (ETI) has been widely dismissed in our culture. That wasn’t always the case. Some...

Now: $14.95
Was:
Gilbert Keith Chesterton is one of the most celebrated and reverently esteemed figures in modern literature. He was a phenomenally prolific writer. After achieving early success as an illustrator, he...

Understanding the Bible: A Catholic Guide to Applying God's Word to Your Life Today

You Shall Stand Firm: Preserving the Faith in an Age of Apostasy

The Faith of Our Fathers: A Plain Exposition and Vindication of the Church Founded by Our Lord Jesus Christ

Now: $21.95
Was:
Explains the basic tenets of the Catholic Faith and why we hold them. Delves into the historical background of virtually everything people find hard to understand about Catholicism, such as...

A Cardiologist Examines Jesus: The Stunning Science Behind Eucharistic Miracles

Now: $19.95
Was:
The Gospels might not be “good enough” for modernity, and science is certainly its god. But neither is an impediment to the one, true God. Indeed, He is using methods of the twenty-first...

Let Go of Your Fear

Now: $15.95
Was:
Worry begins with fear.And events in our time—pandemic, war, political division, hate—are making us both worried and fearful. Author Gary Zimak wants to help you find hope in God no...