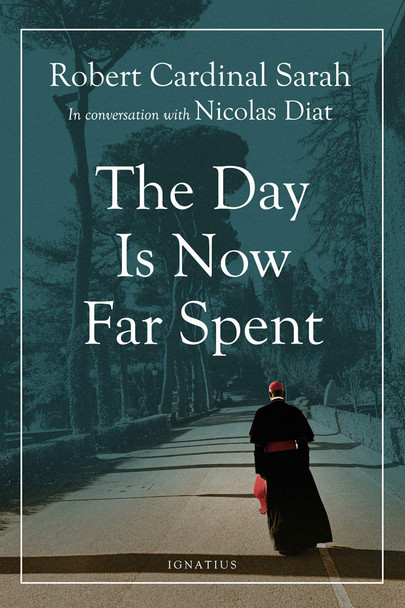 In the powerful book The Day Is Now Far Spent by the acclaimed spiritual leader and best-selling writer, one he calls his "most important", he analyzes the profound spiritual, moral and political crisis in the contemporary world.  He says that he "considers that the decadence of our time has all the faces of mortal peril."

"At the root of the collapse of the West, there is a cultural identity crisis. The West no longer knows who it is, because it no longer knows and does not want to know who made it, who established it, as it was and as it is. Many countries today ignore their own history. This self-suffocation naturally leads to a decadence that opens the path to new, barbaric civilizations."

In these words, Cardinal Sarah summarizes the theme of his book.

His finding is simple: our world is on the brink of the abyss. Crisis of faith and of the Church, decline of the West, betrayal by its elites, moral relativism, endless globalism, unbridled capitalism, new ideologies, political exhaustion, movements inspired by Islamist totalitarianism.... The time has come for an unflinching diagnosis.

After the great international success of his first two books, God or Nothing and The Power of Silence, Cardinal Sarah offers a wide-ranging reflection on the crisis of the contemporary world while teaching many important spiritual lessons.

Now: $17.95
Was:
In a time when technology penetrates our lives in so many ways and materialism exerts such a powerful influence over us, Cardinal Robert Sarah presents a bold book about the strength of silence. The...

Now: $18.95
Was:
In God or Nothing, one of the most prominent and outspoken Catholic Cardinals gives witness to his Christian faith and comments on many current controversial issues. The mission of the Church, the...

Villains of the Early Church: And How They Made Us Better Christians

Now: $22.95
Was:
The early Church faced its share of villains—persecutors like Nero and Julian, heretics like Marcion and Arius. And what good were they? Plenty, say the Church Fathers. The threat of...

Now: $18.95
Was:
In God or Nothing, one of the most prominent and outspoken Catholic Cardinals gives witness to his Christian faith and comments on many current controversial issues. The mission of the Church, the...

The Sacraments in Action

Now: $12.95
Was:
Join in the adventures of young Catholics Hannah and Andy as they learn that a good life requires a solid faith and that God has given us the sacraments to guide and sustain us along the way. This...

$15.95
Now: $5.00
Was: $15.95
These meditations on Mary are filled with wisdom and hope. On ordinary days, on Marian holy days, and in times of spiritual and moral challenges, they offer the strength and the consolation...

Now: $17.95
Was:
In a time when technology penetrates our lives in so many ways and materialism exerts such a powerful influence over us, Cardinal Robert Sarah presents a bold book about the strength of silence. The...

Now: $16.95
Was:
Common Sense About the Common Good Pope Leo XIII wrote of the “harvest of misery” that socialism brings. Pius XI said that it’s impossible to be a good Catholic and a good...

Now: $19.95
Was:
'Who CARES what Jesus did?' This may well be the response of many to the title of this book. Some may shrug it off because of a general disbelief in God, or a refusal to believe that Jesus could...