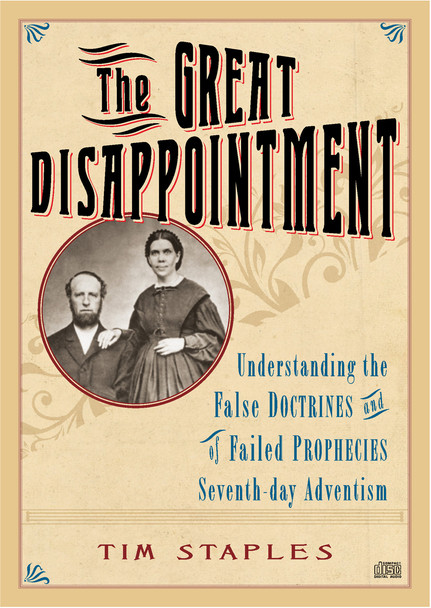 Few Christian groups straddle that fine line between sect and denomination as does the Seventh-day Adventist (SDA) Church. On the one hand, its more than 20 million members profess belief in many tenets of Christian orthodoxy, including the Trinity and Christ’s sacrificial atonement on the cross. On the other hand, its murky origins and collection of eccentric doctrines and practices place it on the fringes of Christianity.

In The Great Disappointment—named after the failed eighteenth-century prophecies of Christ’s return that sparked the Adventist movement—Tim Staples takes a deep dive into SDA history and theology, giving you a thorough understanding of its key beliefs and how they stack up to Catholic truths.

Although Seventh-day Adventism may be best known for its insistence on a Saturday Sabbath and traditionally strict rules about diet and lifestyle, Staples says we should pay more attention to the seven major errors in its doctrines. In this thorough but characteristically engaging and accessible four-disc set, he takes you through each error (God has a body, Ellen Gould White was a unique prophet of Christ’s return, the human soul is not immortal, etc.) and refutes it with solid scriptural evidence and commonsense philosophy.

The SDA Church has influenced modern Christian culture in ways well beyond its numbers. Listen to The Great Disappointment and be able to respond to that influence—and to the Adventists in your life—with knowledge and skill.

$21.95
Now: $12.95
Was:
All Catholics who want to know and defend the Faith need to learn about the time of the apostles and the Fathers, for it is in these ages that the Trinitarian, Christological, and Marian doctrines...

What Lies Beyond (MP3)

Now: $13.95
Was:
Death and judgment. Heaven and hell. They’re called the Last Things, but they should be the first things on our mind, for one way or another they represent the destiny of every human being. Yet...

What You Need to Know About Exorcism: The Devil, Evil Spirits, and Spiritual Warfare (MP3)

Now: $10.95
Was:
Is belief in the devil a relic of a superstitious past? Has science made the devil obsolete? Is Satan merely a metaphor in the Bible for the mystery of evil? Nothing could be farther from the truth...