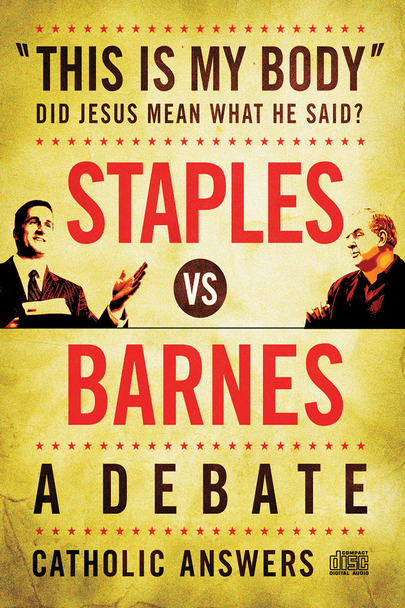 Recorded live in the city of Blacktown, New South Wales, ”This Is My Body”: Did Jesus Mean What He Said? is a classic duel between Catholic belief in the Eucharist and Reformed Protestantism’s purely symbolic “Lord’s Supper.”

To shore up his argument, Tim draws deeply upon Scripture—not just the well-known proof texts, but a range of passages that build a solid foundation for Catholic Eucharistic theology—as well as the words and practices of the early Church.

With his characteristic easy to follow arguments, Tim compellingly draws out the full implications of Christ’s promise that “Unless you eat the flesh of the son of man and drink his blood, you have no life within you.”

Among the questions disputed (with charity and decorum but great skill and zeal) in this ninety-minute debate are:

If you want great real-life example of what happens when anti-Catholic claims run up against solid Catholic answers, ”This Is My Body”: Did Jesus Mean What He Said? is a must-listen.

$14.95
Now: $12.95
Was: $15.95
From the Mayans to Martin Luther to modern doomsday preachers, there’s a long list of people who predicted the end of the age—and got it wrong. As a response to widespread concern about...

$9.99
Now: $7.99
Was: $9.99
From the Mayans to Martin Luther to modern doomsday preachers, there’s a long list of people who predicted the end of the age—and got it wrong. As a response to widespread concern about...

What is Theology of the Body?(MP3)

Now: $8.95
Was: $13.95
When Jesus spoke of giving his body and blood for us to eat and drink, it scandalized some of his followers. How can a man give his flesh to eat? Even to this day, some Christians find Jesus’...

$15.95
Now: $8.95
Was: $15.95
Listen to a Catholic and an Evangelical go head-to-head in a series of 4 lively debates. In Staples vs. Gregg, Catholic apologist Tim Staples and Evangelical Steve Gregg face-off on these...

$13.95
Now: $6.95
Was: $13.95
Imagine having a front-row seat to a high-powered debate between an Evangelical Bible teacher and a Catholic apologist. That's what you'll have in The Bible Answer Man Debate. This unique debate...

$10.95
Now: $6.95
Was: $10.95
Reformation or Revolution? There’s a popular version of the Protestant Reformation that goes something like this: By the sixteenth century, the Catholic Church had become thoroughly corrupted...

$13.95
Now: $8.95
Was: $13.95
Tim Staples marshals the biblical evidence and reveals the critical importance of Mary’s unique and powerful role in God’s plan of salvation. Fundamentalists and Evangelicals see Mary...

$15.95
Now: $8.95
Was: $15.95
What every Catholic should know about two of the Church's most controversial and misunderstood teachings In the dynamic audio presentation, God's Perfect Plan, Catholic Answers apologist Tim Staples...