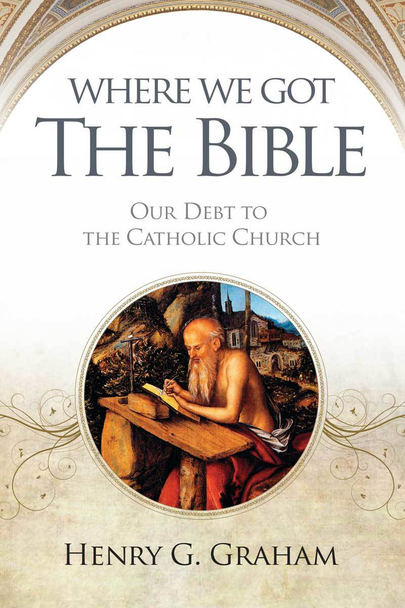 Learn about the history of the Bible and the Church’s important role in preserving it.

Who compiled the biblical text?

Who organized the text?

How was the Bible preserved?

What role does the Bible play in the Catholic Faith?

In Where We Got the Bible, Bishop Henry G. Graham explains how the Catholic Church compiled the sacred text, how medieval monks preserved it, and how Catholic scholars first gave Christians the Bible in their own languages. Along the way, Graham refutes myths about Catholic opposition to Scripture.

To his lively history of the Bible is added his conversion story, From the Kirk to the Catholic Church. Brought up a Calvinist in Scotland, Graham became a minister but found himself irresistibly drawn to the Catholic Faith, eventually becoming a bishop.

Where Is That In The Bible? (DVD)

Now: $19.95
Was:
In the dynamic DVD presentation Where Is That In The Bible?, you'll discover the fathomless riches of Sacred Scripture as you journey through twenty key biblical subjects with your host, best-selling...

Where Is That in the Bible?

Now: $12.95
Was:
When non-Catholics start quoting Bible verses to "prove" that Catholic teachings aren't biblical, reach for this powerful Bible-based explanation and defense of the Catholic Faith! Where Is That In...

The Bible Blueprint for the Priesthood (Digital)

Now: $10.95
Was:
Catholics believe that Christ instituted a ministerial priesthood specially ordained to teach and sanctify his people. Most Protestants think that the only priesthood—at least the only one...

Now: $9.99
Was:
Many Protestants call themselves “Bible Christians”—in contrast with Catholics, who ignore the Bible because they have the Church instead. Too many Catholics have taken this...

Now: $9.99
Was:
The theory goes like this: Just a few centuries after Christ’s death, around the time the Roman Empire converted to Christianity, the true Faith suffered a catastrophic falling-away. The simple...

Now: $3.99
Was:
“Where Is That in the Bible?” Fundamentalists — and many other Protestants — use this question all the time, particularly when they’re dealing with Catholics. When...

Now: $4.99
Was:
Wouldn’t it be great to have a book to give non-Catholic or ex-Catholic friends and family to explain exactly why we believe what we believe? The good news is that now there is! Why...

Now: $9.99
Was:
Some differences between Catholicism and Protestantism can be tricky to grasp, but one of them just requires the ability to count: Catholic bibles have seventy-three books, whereas Protestant bibles...

Why Mary? Her Role in God's Plan (Digital)

Now: $0.99
Was:
While all Christians -- and even people of other faiths -- agree that Mary is the mother of Jesus Christ, her role beyond this is not as clear. In Why Mary?, you will come to understand why it is...

Now: $9.99
Was:
From the cross Jesus gave us his mother to be our mother, too: a singularly holy model, consoler, and intercessor for our spiritual journey. Yet most Protestants—and too many...

Now: $9.99
Was:
In his bestseller Memorize the Faith!, Kevin Vost rediscovered a memory method invented by the ancient Greeks and perfected by medieval scholars, and showed twenty-first-century Catholics how to use...

Now: $9.99
Was:
What Did Early Christians Really Believe? The Answer Will Surprise and Amaze You! The Fathers Know Best: Your Essential Guide to the Teachings of the Early Church is a unique resource that...