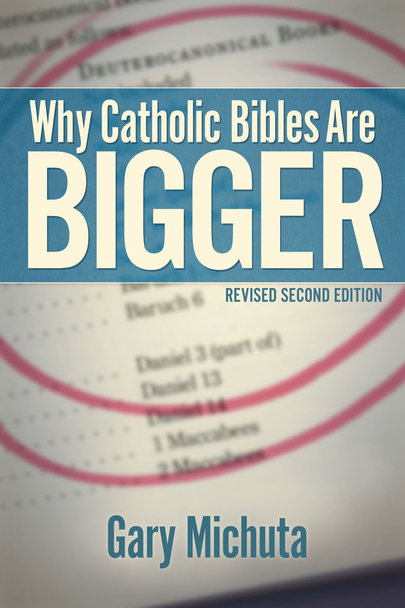 Some differences between Catholicism and Protestantism can be tricky to grasp, but one of them just requires the ability to count: Catholic bibles have seventy-three books, whereas Protestant bibles have sixty-six—plus an appendix with the strange title Apocrypha.

Protestants claim that the medieval Catholic Church added six extra books that had never been considered part of the Old Testament, either by Jews or early Christians.

Catholics say that the Protestant Reformers removed those books, long considered part of Sacred Scripture, because they didn’t like what they contained.

In Why Catholic Bibles Are Bigger, Gary Michuta presents a revised and expanded version of his authoritative work on this key issue.

Combing the historical record from pre-Christian times to the Patristic era to the Reformation and its aftermath, he traces the canon controversy through the writings and actions of its major players.

You’ll be left with a clear picture of the causes of this tragic divide, and you’ll be able to explain and defend the reasons for the full, unabridged Catholic Bible.

Now: $59.95
Was:
This is the Revised Standard Version - Catholic Edition (RSV-CE). It has been acclaimed for decades as the clearest, most accurate, and most beautiful translation of the Bible in modern English. Key...

Why Be Catholic? (Digital)

Now: $5.95
Was: $7.95
Don't you wish everyone you knew was Catholic?In his groundbreaking DVD, Why Be Catholic?, Catholic Answers Director of Apologetics Tim Staples, offers an engaging and simple solution:...

Now: $12.99
Was:
Many Protestants call themselves “Bible Christians”—in contrast with Catholics, who ignore the Bible because they have the Church instead. Too many Catholics have taken this mistaken assumption for...

Now: $30.00
Was: $49.95
The Augustine Bible features a beautiful foil-stamped slipcase and a durable matte cover to ensure that you can use and treasure this Bible for years to come. Printed in Italy, The Augustine Bible...

Now: $20.95
Was:
Did the Catholic Church add extra books to the Bible? Or did Protestant leaders have them removed? Find out the truth! Some differences between Catholicism and Protestantism can be tricky to...

Now: $12.99
Was:
Many Protestants call themselves “Bible Christians”—in contrast with Catholics, who ignore the Bible because they have the Church instead. Too many Catholics have taken this...

Now: $6.99
Was:
Wouldn’t it be great to have a book to give non-Catholic or ex-Catholic friends and family to explain exactly why we believe what we believe? The good news is that now there is! Why...

Now: $5.99
Was:
Learn about the history of the Bible and the Church’s important role in preserving it. Are Catholics anti-Bible? Who compiled the biblical text? Who organized the text? How was the...

Hostile Witnesses: How the Historic Enemies of the Church Prove Christianity (Digital)

Now: $12.99
Was:
One of the ways Jesus answered his critics was to use their own words against them—to show how even the enemies of the Faith admitted crucial facts that undermined their own position...

Now: $12.99
Was:
Have you ever read something in the Bible that made you just scratch your head? Has a skeptic ever challenged you to defend a seemingly scandalous verse of Scripture? You’re not alone...

Now: $9.99
Was: $12.99
Do you want to learn how to defend and explain… The existence of God… The reliability of the Bible… The Real Presence of Christ in the Eucharist… The authority of the pope...

Now: $12.99
Was:
What if Protestantism were true? What if the Reformers really were heroes, the Bible the sole rule of faith, and Christ’s Church just an invisible collection of loosely united believers? As...