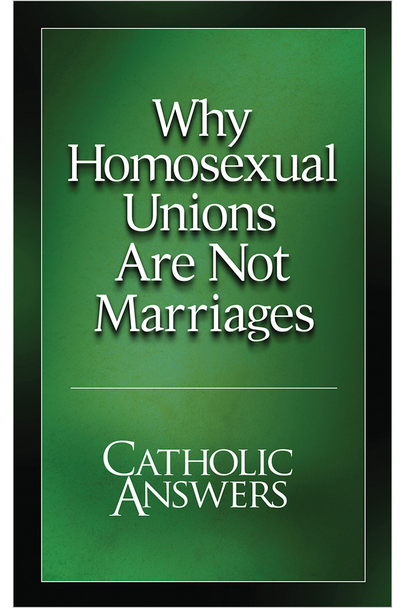 Today homosexual activists are demanding the legalization of same-sex “marriage.”

In some places they have even achieved this goal.

They assert that this is a matter of equality.

If heterosexuals can marry people of the opposite sex, they argue, then equality demands that homosexuals be allowed to marry people of the same sex. Many have found this argument compelling. Others have no objection to the idea of homosexual marriage. Both of these are grave signs. They reveal just how much damage the institution of marriage has already suffered.

Opponents of homosexual marriage argue that if marriage were redefined to include same-sex couples, then both marriage and families would suffer great damage. That is quite true, but marriage has already been greatly damaged or else the idea that two people of the same sex could marry each other wouldn’t even be under discussion. The fact that it is shows that a large segment of the public does not understand the basics of marriage. They have forgotten—or never knew—what marriage is.

In Catholic Answers booklet Why Homosexual Unions Are Not Marriages you’ll find an abundance of information on the issue that has been pushed to the front lines when it comes to the ongoing “Culture War” we find ourselves in.

This handy booklet covers topics including: What Marriage Is Why Societies Recognize Marriages Why Society Shouldn’t Pretend Homosexual Unions Are Marriages Why This Is Not a “Religious Issue” How Can We Show True Compassion for Those with Same-Sex Attraction? And so much more…

Now: $3.95
Was: $5.95
Have you noticed how some of the New Atheists don’t even bother trying to disprove God’s existence? Your arguments in favor of God don’t even deserve a reply, they say, because not...

Why Marriage Is A One-Flesh Union (MP3)

$3.95
Now: $2.95
Was: $3.95
Marriage is fundamental to mankind. The Supreme Court has declared that homosexual “marriage” is a human right. The once fervently Catholic people of Ireland have done the same. How did...

$3.95
Now: $2.95
Was: $3.95
The Lifelong Bond with a Noble Purpose What is Christian marriage all about? How can I know if I have found the right person to marry? Is it true that divorced people are excluded from the...

Why Mary? Her Role in God's Plan (Digital)

$0.99
Now: $0.79
Was: $0.99
Islam: A Catholic Perspective provides a concise overview of Islam -- and evaluates their history and beliefs from a Christian point of view. Using a balanced approach, this booklet gives Islam...

$1.99
Now: $0.99
Was: $1.99
In his best-selling booklet Absolute Relativism: The New Dictatorship and What to Do About It, Chris Stefanick tackles all the tough questions about Relativism by showing how bankrupt and impractical...

$0.99
Now: $0.79
Was: $0.99
Every year it kills more people than heart disease, stroke, lung disease, cancer, diabetes, AIDS, accidents, murder, and war—put together. It kills almost as many people as all other causes...

$3.99
Now: $2.95
Was: $3.95
Toward a Chaste Ordering of Desires What does the Church actually teach about same-sex attraction? If God created certain people gay, how can we say that it’s sinful for them to live that...

$0.99
Now: $0.79
Was: $0.99
In the new revised edition of his booklet from Catholic Answers, Mass Appeal: the ABC's of Worship, Jimmy Akin masterfully walks you through the Mass from beginning to end, explaining precisely what...

$0.99
Now: $0.79
Was: $0.99
With the recent government mandate requiring insurance companies to pay for contraception, sterilization, and abortifacient drugs, a clarion warning has rung out for all persons of faith: Religious...

$4.99
Now: $2.99
Was: $4.99
The Church’s teaching on sexual morality – never will change because it never can change. In a world where modern culture treats sexuality as a theme park for adults instead of as a...