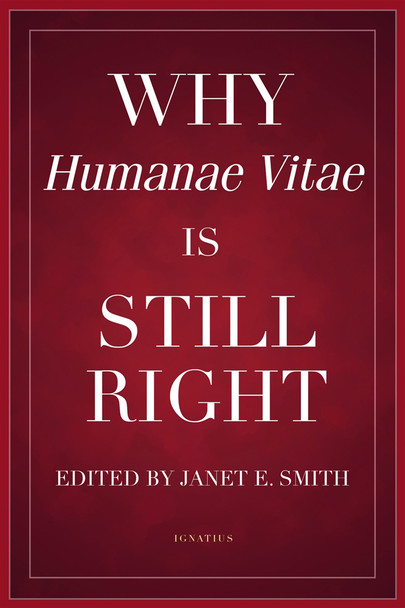 After half a century, how has the teaching of Pope Paul VI on marriage and birth control, presented in his encyclical Humanae vitae (On Human Life), held up? Very well, says philosopher Janet Smith and her colleagues in Why Humanae Vitae Is Still Right.  A sequel to Smith's classic Why Humanae Vitae Was Right, this new volume shows how the ethical, theological, spiritual, and sociological case for Paul VI's controversial document remains strong—indeed, how it's in some ways even stronger today, following Pope John Paul II's Theology of the Body and in light of the problems caused by the sexual revolution.

Why Humanae Vitae Is Still Right includes the Krakow Document composed under the supervision of Cardinal Karol Wojtyla (later, Pope John Paul II), which provided research by moral theologians and other experts that helped to shape Humanae vitae to be a more personalistic document.

$19.95
Now: $10.00
Was: $19.95
Have you noticed how some of the New Atheists don’t even bother trying to disprove God’s existence? Your arguments in favor of God don’t even deserve a reply, they say, because not only does God not...

Now: $5.95
Was: $7.95
Have you noticed how some of the New Atheists don’t even bother trying to disprove God’s existence? Your arguments in favor of God don’t even deserve a reply, they say, because not only does God not...

Now: $6.99
Was: $9.99
As the Church and the world remember the fiftieth anniversary of Humanae Vitae this summer, Catholic Answers Press is publishing an important new multi-contributor exposition of that prophetic...

Inseparable: Five Perspectives on Sex, Life, and Love in Defense of Humanae Vitae

Now: $13.95
Was: $16.95
As the Church and the world remembered the fiftieth anniversary of Humanae Vitae, Catholic Answers Press published an important new multi-contributor exposition of that prophetic encyclical -...

$19.95
Now: $10.00
Was: $19.95
Is the Church wrong on contraception? In a world that practically worships the pursuit of sexual pleasure, the Catholic Church’s teaching on contraception can seem unintelligible. Critics say...

What Is Marriage?: Man and Woman: A Defense

Now: $15.95
Was:
Until today, no society had seen marriage as anything other than a conjugal partnership: a male-female union. What Is Marriage? identifies and defends the reasons for this historic consensus...

A Catholic Introduction to the Bible: The Old Testament

Now: $54.95
Was:
Although many Catholics are familiar with the four Gospels and other writings of the New Testament, for most, reading the Old Testament is like walking into a foreign land. Who wrote these...