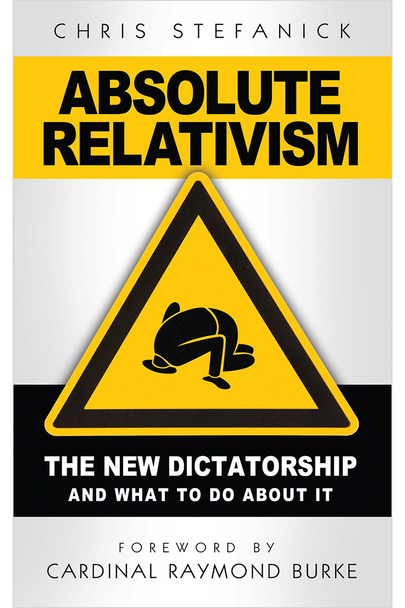 In his best-selling booklet Absolute Relativism: The New Dictatorship and What to Do About It, Chris Stefanick tackles all the tough questions about Relativism by showing how bankrupt and impractical it is.

Through his down-to-earth, easily accessible Question-and-Answer format, Chris Stefanick shows that far from being the answer to “World Peace” – or even personal peace of mind – Relativism suffers from a self-destructive rot.

Indeed, this pernicious philosophy’s glittering façade may be updated with each generation’s quest for meaning, but as Stefanick shows, this dead-end error remains the same cop-out it was the day the Truth Himself took up his cross to defeat it.

Find out why Archbishop Charles J. Chaput, OFM Cap., Archbishop of Philadelphia, calls Absolute Relativism “an excellent resource for anyone seeking to understand the spirit of our times and the challenges we face in a world increasingly without moral compass.”

$3.95
Now: $2.95
Was: $3.95
In his best-selling booklet Absolute Relativism: The New Dictatorship and What to Do About It, Chris Stefanick tackles all the tough questions about Relativism by showing how bankrupt and impractical...

$4.95
Now: $2.95
Was: $4.95
“That’s true for you, but not for me!” In Refuting Relativism you’ll learn how to refute relativist slogans and provide compelling evidence for the objective truth of the...

What the Reformation Was All About (MP3)

$4.95
Now: $2.95
Was: $4.95
Jimmy Akin explores how a dispute about a minor doctrine became the powder keg of the Reformation, which blew apart the framework of Western Christian theology. As the crisis worsened, the...

$9.99
Now: $7.99
Was: $9.99
From the Mayans to Martin Luther to modern doomsday preachers, there’s a long list of people who predicted the end of the age—and got it wrong. As a response to widespread concern about...

What Lies Beyond (Digital)

$13.95
Now: $9.95
Was: $13.95
Death and judgment. Heaven and hell. They’re called the Last Things, but they should be the first things on our mind, for one way or another they represent the destiny of every human being. Yet...

$3.95
Now: $2.95
Was: $3.95
In his best-selling booklet Absolute Relativism: The New Dictatorship and What to Do About It, Chris Stefanick tackles all the tough questions about Relativism by showing how bankrupt and impractical...

$9.99
Now: $7.99
Was: $9.99
Do you want to learn how to defend and explain… The existence of God… The reliability of the Bible… The Real Presence of Christ in the Eucharist… The authority of the pope...

$0.99
Now: $0.49
Was: $0.99
Islam: A Catholic Perspective provides a concise overview of Islam -- and evaluates their history and beliefs from a Christian point of view. Using a balanced approach, this booklet gives Islam...

$4.99
Now: $2.99
Was: $4.99
Wouldn’t it be great to have a book to give non-Catholic or ex-Catholic friends and family to explain exactly why we believe what we believe? The good news is that now there is! Why...

$0.99
Now: $0.49
Was: $0.99
In the new revised edition of his booklet from Catholic Answers, Mass Appeal: the ABC's of Worship, Jimmy Akin masterfully walks you through the Mass from beginning to end, explaining precisely what...

Answering Atheism: How to Make the Case for God with Logic and Charity (Digital)

$9.99
Now: $7.99
Was: $9.99
Today’s popular champions of atheism are often called New Atheists, because they don’t just deny God’s existence (as the old atheists did)—they consider it their duty to scorn...

$3.99
Now: $2.95
Was: $3.99
“Where Is That in the Bible?” Fundamentalists — and many other Protestants — use this question all the time, particularly when they’re dealing with Catholics. When...

$9.99
Now: $7.99
Was: $9.99
In his bestseller Memorize the Faith!, Kevin Vost rediscovered a memory method invented by the ancient Greeks and perfected by medieval scholars, and showed twenty-first-century Catholics how to use...

$9.95
Now: $7.99
Was: $9.99
A generation ago, Christian parents didn’t have to worry about how to explain transgenderism to their nine-year-old, or help their teenager deal with mockery at school for believing in...