America on Trial: A Defense of the Founding 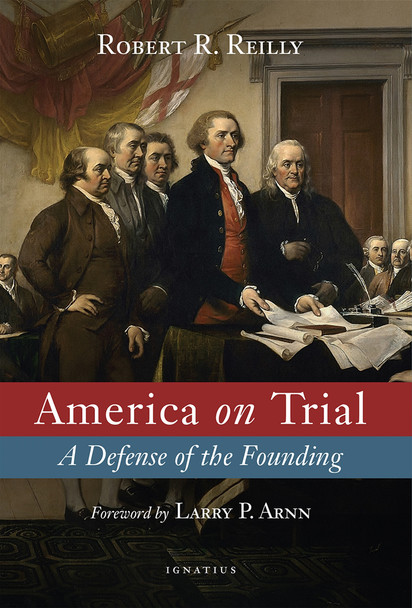 America on Trial: A Defense of the Founding

The Founding of the American Republic is on trial. Critics say it was a poison pill with a time-release formula; we are its victims. Its principles are responsible for the country's moral and social disintegration because they were based on the Enlightenment falsehood of radical individual autonomy.

In America on Trial, Robert Reilly declares: not guilty.

To prove his case, he traces the lineage of the ideas that made the United States, and its ordered liberty, possible. These concepts were extraordinary when they first burst upon the ancient world: the Judaic oneness of God, who creates ex nihilo and imprints his image on man; the Greek rational order of the world based upon the Reason behind it; and the Christian arrival of that Reason (Logos) incarnate in Christ. These may seem a long way from the American Founding, but Reilly argues that they are, in fact, its bedrock. Combined, they mandated the exercise of both freedom and reason.

These concepts were further developed by thinkers in the Middle Ages, who formulated the basic principles of constitutional rule. Why were they later rejected by those claiming the right to absolute rule, then reclaimed by the American Founders, only to be rejected again today? Reilly reveals the underlying drama: the conflict of might makes right versus right makes might.  America's decline, he claims, is not to be discovered in the Founding principles, but in their disavowal.

$4.95
Now: $2.00
Was: $4.95
In this talk from Catholic Answers' 2013 National Apologetics Conference, Matt Fradd reveals what we must do to fight today’s unprecedented sexual degradation.

Tim Staples - Black & White in a Gray America: An Apologia for Apologetics (MP3)

$4.95
Now: $2.00
Was: $4.95
In this talk from Catholic Answers' 2013 National Apologetics Conference, Tim Staples takes on the problem of moral relativism and the withering effects it has.

What Is Marriage?: Man and Woman: A Defense

Now: $15.95
Was:
Until today, no society had seen marriage as anything other than a conjugal partnership: a male-female union. What Is Marriage? identifies and defends the reasons for thi

Buy A Daily Defense And Get Meeting The Protestant Challenge Free!

$34.95
Now: $30.95
Was: $34.95
This latest book by the internationally acclaimed investigative journalism team is their most intriguing work to date.  For Vatican Secret Archives they had access to one of the most...

Now: $17.95
Was: $21.95
Are anti-Catholic Myths the original "Fake News"? Anti-Catholics like to paint Church teachings in a way that makes them seem vain, backward, or superstitious, all in the hope of drawing people out...

$16.95
Now: $14.95
Was: $16.95
The Virgin Mary’s part in history doesn’t begin and end with her yes to God. Popular Catholic author Mike Aquilina points out that Mary is at the center of history from creation to the...

Now: $17.95
Was: $19.95
In the bloody Civil War that split our nation, American bishops worked for the success of the Union . . . and of the Confederacy! As Catholics slaughtered Catholics, pious priests on both sides...

$14.95
Now: $12.95
Was: $14.95
The Saints Chronicles bring vividly to life the stories of courageous Christians from the earliest days of Christianity to modern times. All four volumes of this Graphic Novel Series are packed with...