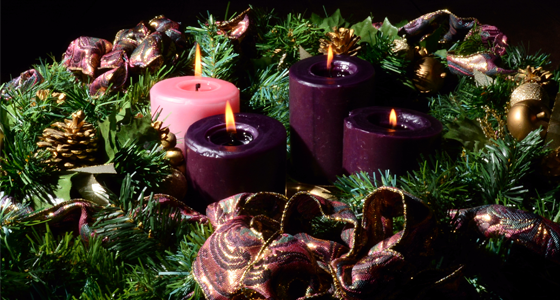 The word advent derives from a Latin word, adventus, that means “arrival” or “appearance.” The Directory on Popular Piety and the Liturgy, a document of the Congregation for Divine Worship and the Discipline of the Saints, says of Advent,

Advent is a time of waiting, conversion and of hope: waiting-memory of the first, humble coming of the Lord in our mortal flesh; waiting-supplication for his final, glorious coming as Lord of history and universal judge; conversion, to which the liturgy at this time often refers, quoting the prophets . . . joyful hope that the salvation already accomplished by Christ . . . and the reality of grace in the world, will mature and reach their fullness, thereby granting us what is promised by faith (96).

Advent is the liturgical season during which the Church prepares for Christmas by penance, acts of charity, and celebration of the sacraments. The penances are traditionally less strict than those observed during Lent, and the Church in the West no longer requires Catholics to fast or abstain from meat. But the season has a flavor of its own and isn’t merely “Lent lite.”

To begin with, the Church’s liturgical year starts with Advent. The focus is on preparation for the coming of the Messiah, both in his first coming at Christmas and in anticipation of his final coming at the end of time. The Directory states:

Popular piety is particularly sensitive to Advent, especially when seen as the memory of the preparation for the coming of the Messiah. The Christian people are deeply conscious of the long period of expectation that preceded the birth of our Savior. The faithful know that God sustained Israel’s hope in the coming of the Messiah by the prophets (97).

In its liturgies during Advent, the Church points to the expectation and hope of Advent through its devotions and eucharistic rubrics. For example, on each of the Sundays of Advent, a candle on an Advent wreath is lit to mark the progress of the season. Three candles are violet to symbolize the penitential nature of the season. One candle is rose and is lit on the third Sunday of Advent, called Gaudete Sunday from the Latin word for joy. Rose, a lighter color than violet, represents the “brightening” of the faithful in anticipation of Christ’s arrival. Similarly, the vestments and altar cloths used during Advent are violet or rose in honor of the spirit of Advent.

To begin to appreciate the “true meaning of Advent,” we can look to a few of the saints of Advent: the models of Christian perfection to whom the Church points for our edification during these three to four weeks.

St. Francis Xavier, whose feast is December 3, was one of the original members of the Society of Jesus (or Jesuits). He is best known for his mission trips to the Far East, opening India and Japan to the spread of the gospel. Francis hoped to do the same in China but died on the journey. He was named a patron saint of the missions because of his success at evangelism.

Not as well known was Francis’s reputation as a wonderworker. He cured the sick, restored hearing and speech to the deaf and mute, multiplied coins that he gave to the poor, and raised the dead. In other words, he performed the same kind of deeds that heralded the coming of the Messiah into the world (Matt. 11:4-5). Christ promised that his followers would perform mighty deeds in his name as signs that they were sent by him (Mark 16:15-18).

Not much is known for certain about St. Nicholas of Myra, the bishop whose feast we celebrate on December 6, but the legends surrounding him are rich and varied. He was also believed to be a wonderworker, but he is better known for his love for children and generosity to the poor. Although some historians question whether he was actually present at the Council of Nicaea, he’s lauded as a fierce defender of orthodoxy, and the popular pious tale that he slugged the heretic Arius at that council makes the rounds of the internet every December.

On December 12, we remember the apparitions of Our Lady of Guadalupe to the peasant visionary, St. Juan Diego (his feast is on December 9). Our Lady’s appearance to the indigenous convert inspired the conversions of millions of native Mexicans within a decade after the apparitions. Although Juan Diego pleaded with Our Lady to send a more worthy emissary to give her message to the bishop that she wanted a church built in her name on Tepeyac Hill, she insisted on lifting up a poor man to speak for her to those in power in Mexico City. Juan Diego spent the remainder of his life spreading the Virgin’s message.

St. John of the Cross, mystic and reformer of the Carmelites, is remembered on December 14. He was a priest and theologian who wrote extensively on “the dark night of the soul.” The “dark night” is often misunderstood to be a time of spiritual desolation, but, rather, it was John’s metaphor for explaining the soul’s journey to union with God. This journey is reminiscent of our journey through Advent, as we wait in joyful hope for the coming of Christ, who is the light of the world (John 1:1-5). From 20 Answers: Seasons & Feasts