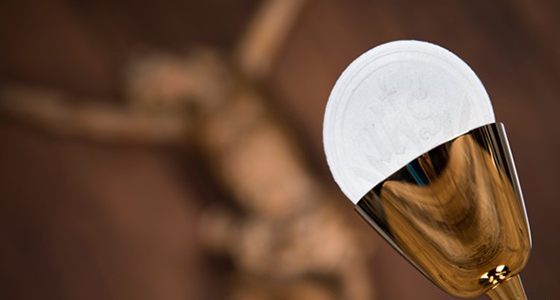 The Catholic Church teaches that when we partake of the Eucharist in Holy Communion, we are literally consuming the body and blood of Jesus Christ.

A key passage from Scripture that Catholics, and other believers in the Real Presence, have looked to throughout the centuries as biblical support for this teaching is John 6:48-67.

There are many reasons Catholics, and other believers in the Real Presence, give as to why we should take Jesus’ words, “eat my flesh, drink my blood,” literally. But perhaps the most persuasive is that both the Jews and his disciples understand him literally, and Jesus doesn’t correct them.

In verse 52, the Jews respond, “How can this man give us his flesh to eat?” In verse 60, his disciples respond, “This is a hard saying; who can listen to it?” You would think that if his audience were mistaken, and given the gravity of this teaching, Jesus would have corrected their literal understanding.

To the contrary, he affirms them. In response to the Jews, Jesus reiterates the need to eat his flesh and drink his blood no fewer than six times in six verses. He affirms his disciples’ literal understanding by letting them walk away.

Let’s take a look at a common comeback from Protestants when presented with the bread of life discourse.

If Catholics interpret Jesus’ command to eat his flesh and drink his blood literally in John 6, then they have to take him literally in other passages when he says he’s a door (John 10:9) and a vine (John 15:5).

Protestant apologist Todd Baker bolsters this argument by highlighting the fact that Jesus’ words in John 6 are part of a series of “I Am” statements in John’s Gospel.

Baker argues that this “I Am” statement clues us in to how we’re to understand his words concerning the bread he will give, which he identifies as his “flesh,” and that we must eat it. Like in John 10:9 and John 15:5, we should interpret him figuratively.

This stands in stark contrast to the audience in John 6. Both the Jews and Jesus’ disciples understand Jesus to be speaking literally. This gives us reason to think something different is going on in John 6 from what’s happening in the door and vine passages. And the contextual evidence confirms this initial hunch.

As we mentioned above, Jesus affirms the literal thoughts of both the Jews and his disciples. He even lets the latter walk away in verse 66, and then turns to the apostles and says, “Do you also wish to go away?”

Given the presence of the literal thoughts among Jesus’ audience in John 6 compared to the lack of such thoughts in the door and vine passages, and Jesus’ engagement with those literal thoughts by way of affirming them, we can conclude that the door and vine passages are meant to be read differently from how we should read Jesus’ teaching about eating his flesh and drinking his blood.

We hope you enjoyed this excerpt's from Karlo Broussard's book ,Meeting the Protestant Response. Order your copy today!