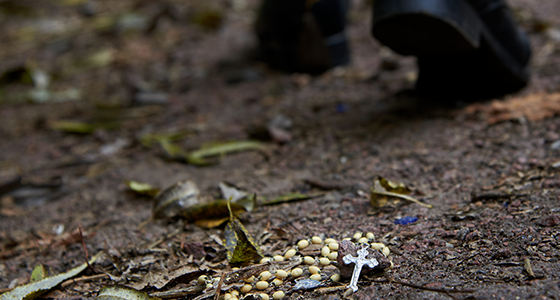 How can the Catholic Church teach that it’s possible for us to lose our salvation when Jesus says that his sheep always hear his voice and that no one can snatch us out of his hand?

Recall that the Catechism warns of “offending God’s love” and “incurring punishment” (2090). To fear incurring the punishment of hell implies that a person can’t have absolute assurance of his salvation.

There is a Bible passage that some Protestants use to mount a challenge—John 10:27-29:

If Jesus says that no one shall snatch Christians out his and the Father’s hand, doesn’t it follow that we are eternally secure?

Jesus’ promise to protect his sheep is on condition that his sheep remain in the flock. It doesn’t exclude the possibility that a sheep could wonder off, and thus lose the reward of eternal life.

The condition for being among Jesus’ sheep, and thus being rewarded with eternal life, is that we continue hearing Jesus’ voice and following him. Jesus teaches this motif of continued faithfulness a few chapters later with his vine and branch metaphor in John 15:4-6:

Abide in me, and I in you. As the branch cannot bear fruit by itself, unless it abides in the vine, neither can you, unless you abide in me. I am the vine, you are the branches. He who abides in me, and I in him, he it is that bears much fruit, for apart from me you can do nothing. If a man does not abide in me, he is cast forth as a branch and withers; and the branches are gathered, thrown into the fire and burned.

Just as we the branches must remain in Christ the vine, lest we perish, so too we the sheep must continue to listen to the voice of Jesus the shepherd, lest we perish.

Jesus only says that no external power can snatch a sheep out of his hands. He doesn’t say that a sheep couldn’t exclude itself from his hands.

The passage says that no one shall snatch—take away by force—Christians out of the hands of Jesus and the Father. This doesn’t preclude the possibility that we can take ourselves out of Jesus’ protecting hands by our sin. A similar passage is Romans 8:35-39, where Paul lists a series of external things that can’t take us out of Christ’s loving embrace. But he never says that our own sin can’t separate us from Christ’s love.

Like Paul in Romans 8:28-29, Jesus is telling us in John 10:27-29 that no external power can snatch us out of his hands. But that doesn’t mean we can’t voluntarily leave his hands by committing a sin “unto death” (1 John 5:16-17). And if we were to die in that state of spiritual death without repentance, we would forfeit the gift that was promised to us: eternal life.

There is abundant evidence from Scripture that Christians do in fact fall from a saving relationship with Christ due to sin.

The Bible teaches that sheep do go astray.

Consider, for example, Jesus’ parable about the lost sheep whom the shepherd goes to find (Matt. 18:12-14; Luke 15:3-7). Sure, the shepherd finds the sheep (Jesus never stops trying to get us back in his flock). But the point is that the sheep can wander away.

The same motif is found in Jesus’ parable about the wicked servant who thinks his master is delayed and beats the other servants and gets drunk (Matt. 24:45-51). Notice that the servant is a member of the master’s household. But because of his failure to be vigilant in preparing for his master’s return, he was found wanting and was kicked out with the hypocrites, where “men will weep and gnash their teeth” (v.51). Similarly, Christians can be members of Christ’s flock and members of his household, but if we don’t persevere in fidelity to him we will lose our number among the elect.

That Christians can fall out of Christ’s hands due to sin is evident in Paul’s harsh criticism of the Galatians:

Now I, Paul, say to you that if you receive circumcision, Christ will be of no advantage to you…You are severed from Christ, you who would be justified by the law; you have fallen away from grace (Gal. 5:2,4).

If some of the Galatians were “severed from Christ” and “fallen from grace,” then they were first in Christ and in grace. They were counted among the flock, but they later went astray. Not because they were snatched, but by their own volition.

Did you enjoy this excerpt from Meeting the Protestant Challenge? Order your copy today!