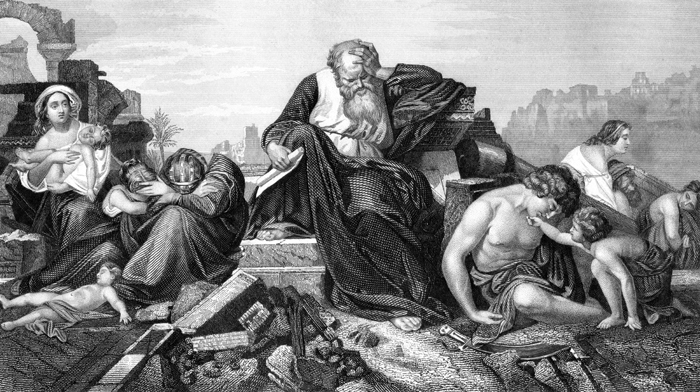 Many in the Protestant community discount books not found in their version of the Old Testament on the ground that there were “400 silent years” between Malachi and the ministry of Jesus.

This claim is bolstered by the assertion that there were no prophets in this period. The implication is that, without the divine inspiration given to prophets, books of Scripture couldn’t be written.

There are several problems with this assertion. One is that it isn’t clear that all the books in the Protestant Old Testament were written before 400 B.C. Even among conservative Protestant scholars, a significant body of opinion holds that some were much closer to the time of Christ.

Another problem is that an author doesn’t have to be a prophet to write Scripture. While all of the biblical authors were divinely inspired, this didn’t mean that they functioned in society as prophets. Psalms and Proverbs attribute many passages to David and Solomon, but they were kings, not prophets. The truth is, we don’t know who wrote many Old Testament books—including all the historical ones (Joshua to 2 Chronicles)—and it’s just supposition to claim that they were by prophets. We also have no evidence that New Testament authors like Mark and Luke ever received prophetic revelations.

But even if we granted that one had to be a prophet to author Scripture, we don’t have evidence that the gift of prophecy was absent in this period. Sometimes advocates of the “four hundred silent years” appeal to passages like 1 Maccabees 4:46 and 9:27 to support the claim that there were no prophets in this era, but these passages don’t show this.

The first describes how, around 164 B.C., Judah Maccabee and his men debated what to do about an altar the Gentiles had defiled. They tore it down and stored “the stones in a convenient place on the temple hill until there should come a prophet to tell what to do with them.” The second refers to a few years later, when “there was great distress in Israel, such as had not been since the time that prophets ceased to appear among them.”

These passages indicate that—in the 160s B.C.—there were no prophets functioning, but that doesn’t mean that God never gave prophecies between Malachi and John the Baptist, or that Jews of the period didn’t expect new prophets. First Maccabees shows they did. Thus, in 4:46, it says that they set aside the altar stones until “there should come a prophet to tell them what to do with them.” Similarly, 1 Maccabees 14:41 states that, in 140 B.C., Simon Maccabee was made ruler of the people “until a trustworthy prophet should arise”—again indicating an expectation of further prophets, including the possibility of one arriving in the reign of Simon Maccabee.

The absence of prophets in the time of the Maccabees thus was a temporary event, and it wasn’t unprecedented. There were similar lulls in prophetic activity in other periods. First Samuel 3:1 reveals that, when the prophet Samuel was a boy, “the word of the Lord was rare in those days; there was no frequent vision.” Yet later in his life, when Samuel anointed Saul as king, there was a band of prophets that met Saul on the road, and he himself was overcome by the Spirit and began to prophecy. Thus, it became a proverb, “Is Saul also among the prophets?” (see 1 Sam. 10:9-12).

Another prophetic lull is mentioned during the Babylonian Exile. Psalm 74, which records the destruction of the temple (vv. 4-7), says, “We do not see our signs; there is no longer any prophet” (v. 9). Similarly, Lamentations 2:9 describes events following the destruction of the temple by saying Zion’s “prophets obtain no vision from the Lord.” Yet neither passage indicates that the age of Old Testament prophecy was closed, for prophets like Jeremiah, Ezekiel, and Daniel were active during the Exile. Neither do these prophetic lulls indicate Scripture couldn’t be written, for both passages are part of Scripture!

Even in a prophetic lull, God could give revelation, as in the case of the previous two passages. Similarly, in the time of the Maccabees, Judah Maccabee himself received a revelation (2 Macc. 15:11-16), though he didn’t function as a formal prophet.

If you enjoyed this excerpt and want to find out more, order your copy of The Bible is a Catholic Book today!