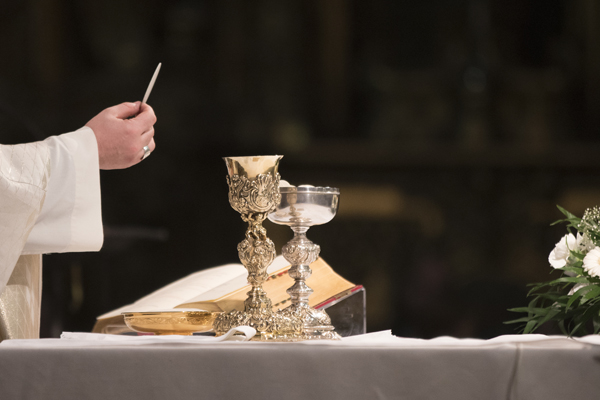 It's time for you to subscribe and find out what all the fuss is about.

But first, here's a Sneak Peek at an upcoming article by Joe Heschmeyer where he considers the question - Does the Mass Contradict or Fulfill Worshiping God “In Spirit and Truth”?

One of the most commonly abused Bible verses by Protestants is John 4:24, in which Jesus tells the Samaritan woman that “God is spirit, and those who worship him must worship in spirit and truth.”

We find the verse regularly misused, typically in one of two ways, by even the most prominent Protestant theologians.

The first way is to suggest that the external forms of worship are irrelevant. John Wesley (1703 – 1791), the founder of Methodism, in his famous Letter to a Roman Catholic, wrote,

I say not a word to you about your opinions or outward manner of worship. But I say, all worship is an abomination to the Lord, unless you worship Him in spirit and in truth, with your heart as well as your lips, with your spirit and with your understanding also. Be your form of worship what it will, but in everything give Him thanks, else it is all but lost labor.

In Wesley’s view, the Catholic mode of worship isn’t so much evil as simply unnecessary. The outward form of worship is basically irrelevant, since what matters is the interior act of worshiping God “in spirit and in truth.”

A harsher view of Catholic worship comes from the Calvinist wing of Protestantism.

In a 1652 sermon entitled “The chamber of imagery in the Church of Rome laid open; or, an Antidote to Popery,” the Puritan theologian John Owen declared, “That which I design here, is to obviate the meretricious allurements of the Roman worship, and the pretences of its efficacy to excite devotion and veneration by its beauty and decency. The whole of it is but a deformed image of that glory which they cannot behold.”

Beneath the twenty-dollar words, Owen was saying that the purpose of his sermon was to make Catholic liturgy less appealing, by proving that it’s simply a “deformed image” of true worship. The only worthwhile worship, Owen argued, is “to obtain and preserve in our hearts an experience of the power and efficacy of that worship of God which is ‘in spirit and truth.’”

In this view, the exteriors in Catholic worship aren’t just unnecessary, but wicked. Owen argued that men are habitually incapable, “by the light of faith, to discern the glory of things spiritual and invisible,” and so they “make images of them unto themselves, as gods that may go before them.” Thus, Owen argued, Catholics had come up with “ceremonies, vestments, gestures, ornaments, music, altars, images, paintings, with prescriptions of great bodily generation,” that were as poor an attempt to depict heavenly worship as the golden calf was an attempt to depict God.

Many Protestants today hold essentially the same views as either Wesley or Owen, even if they lack the erudition to express themselves in the same way. Some view the Catholic Mass as fine, even as a pleasant way of drawing the soul upward towards God, but nevertheless a mere matter of taste. Others view the Mass as wicked, as an idolatrous parody of true worship. But both camps tend to view true worship as something essentially internal and invisible. As Owen put it, “the worship of the church is spiritual, and the glory of it invisible unto eyes of flesh.”

The argument behind each of these theories tends to go something like this.

Back in the Old Covenant, Jews could only pray to God in a handful of spots, and in precise rituals; what Relevant Magazine recently called “a ritualistic series of mechanical devotions centered around the temple in Jerusalem.” Within the temple there was a veil, which (according to Southern Baptist Theological Seminary’s Daniel Gurtner) “was a physical, visible barrier indicating that access to God was strictly prohibited because of his holiness.” For Samaritans, it was the same story, but on Mount Gerizim instead of the Jerusalem temple.

But everything changes with Jesus. He dies on the Cross, the veil it torn, and now we can go directly to God. No longer do we need priests or rituals or anything else. As Billy Graham said, while one style of worship “may be more comfortable for you than another; the important thing is that it should turn your heart toward God in worship and praise,” and so you can’t “look down on those who prefer other styles of worship.” After all, “God is more concerned about the attitude of our hearts than the way we express it.”

So how should a Catholic respond to all of this?

By carefully separating out the truth from the falsehoods. There’s just enough truth in what I’ve relayed above that it seems convincing – particularly since most Christians (Catholics and non-Catholics alike) have only a dim idea of what Jewish prayer and worship was like. It’s true that it’s important to have a heart devoted to God, and it’s true that Christ’s death on the Cross radically transforms worship. But most of the other details are false. To set the record straight, it’s important to understand seven things.

Did you like this excerpt? To find out the seven things Joe wants you to understand, subscribe today to Catholic Answers Magazine!