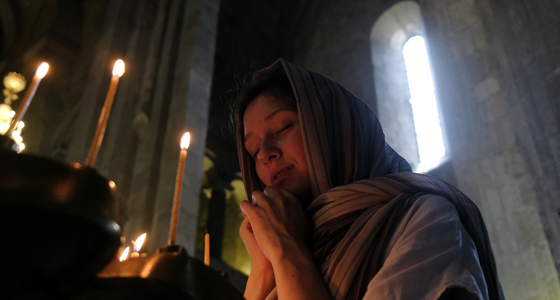 One mode is by way of intercessory prayer. Just as I can request that God help you grow in holiness in this life, by giving you graces to repent of your venial sins, to reorder your will toward him, and to inspire you to perform penitential actions to discharge your debt of temporal punishment, I can request that God help you in the next by bringing your final purification in purgatory to completion. The basis for this intercessory prayer, whether you’re here on earth or in purgatory, is the bond of charity that we have as members in the mystical body of Christ.

Besides intercessory prayer, we can also help the souls in purgatory through works of satisfaction and indulgences.

Remission before God of the temporal punishment due to sins whose guilt has already been forgiven, which the faithful Christian who is duly disposed gains under certain prescribed conditions through the action of the Church which, as the minister of redemption, dispenses and applies with authority the treasury of the satisfactions of Christ and the saints.

Inasmuch as indulgences remit the debt of temporal punishment, indulgences have a satisfactory value. But they don’t necessarily entail pain, as proper works of satisfaction do.

With regard to our works of satisfaction on behalf of the dead, they work a bit differently.

St. Thomas Aquinas teaches that, given the bond of charity that exists among members of Christ’s mystical body, and making us “all one in Christ” (Gal. 3:28), “the work that is done for another becomes his for whom it is done: and in like manner the work done by a man who is one with me is somewhat mine.” St. Paul hints at this principle in 1 Corinthians 12:26: “If one member suffers, all suffer together; if one member is honored, all rejoice together.”

The rewards for such works, however, cannot pertain to the state of another person’s soul, such as being in a right relationship with God here on earth and beatitude in eternal life. My works can’t merit for you to be in a state of grace and receive the final reward of heaven.
But the rewards for these works done for another can pertain to things that follow upon a state, such as discharge of the debt of temporal punishment. By virtue of the bond of charity, the satisfactory value of one Christian’s penitential works can be applied to another Christian for the discharge of his debt of temporal punishment.

Since those who differ as to the debt of punishment, may be one in will by the union of love, it happens that one who has not sinned, bears willingly the punishment for another: thus even in human affairs we see [people] take the debts of another upon themselves.

Like Christ, we can suffer in the place of fellow members of Christ’s mystical body, enduring the pain merited by our brothers’ sins, and thus become “secondary and subordinate redeemers.”

This seems to be what St. Paul meant when he taught in Colossians 1:24: “Now I rejoice in my sufferings for your sake, and in my flesh I complete what is lacking in Christ’s afflictions for the sake of his body, that is, the Church.” For Paul, Christ wills to associate us with his redeeming work on the cross in applying the merits of his passion and death to others. If this is what Paul means here, then he’s saying our sufferings discharge the temporal debt of punishment due for sin, since it’s impossible that our suffering discharge the eternal debt of punishment due for sin.

Since the souls in purgatory are united to us via the bond of charity, such that our works can become theirs, and since they willfully accept any help that is offered them, it follows that our works of satisfaction (suffering willingly embraced out of love for God and neighbor) can be performed in their stead and thus contribute to the discharge of their debt of temporal punishment. In this bearing of pain on account of sin, the evil is not left undone and is re-integrated into the divine order of justice for human behavior.

Want to know more? Order your copy of Purgatory is for Real today!