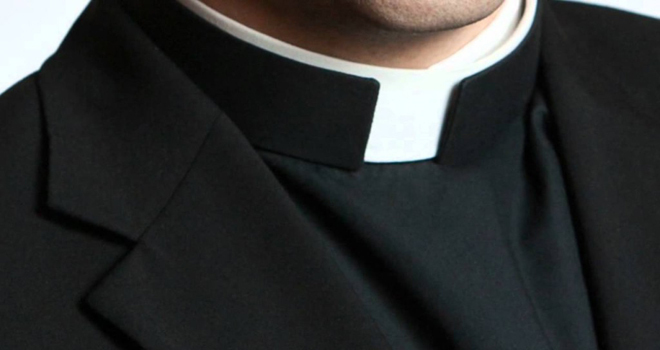 Between the Amazonian Synod and the upcoming book by Pope Emeritus Benedict XVI and Cardinal Robert Sarah, much has been made of the practice of priestly celibacy lately. But it's not the first time.

Anti-Catholics have been spreading myths and falsehoods about the practice for centuries.

The Myth: The Church began mandating clerical celibacy during the Middle Ages so that it could acquire the clergy’s family property.

The History Behind the Myth: Bruno of Alsace was noted for his piety. As bishop of Toul (in modern-day France), he cared deeply for his people. The abuses in the Church, especially among the clergy, pained him. When Pope Damasus II, the third German to sit on the Chair of Peter, died in 1048 after a short pontificate of only twenty-three days, Bruno of Alsace was the logical and saintly choice as his successor.

Pope St. Leo IX (r. 1049-1054) was faced with three major issues that shaped his pontificate: the protection of the Papal States from the encroaching Normans; resolution of disputes with the Eastern Roman Empire (Byzantines); and the reform of the Church. And the Church was indeed in desperate need of reform in the eleventh century. The practice of simony (buying or selling Church offices) was rampant, as were violations of the discipline of celibacy among clergy (deacons, priests, and bishops)

To combat these abuses, Leo IX launched one of the most comprehensive reforms in the history of the Church. To ensure its effectiveness, he did not just issue decrees from Rome and demand obedience; he went on the most significant papal road trip in history, traveling throughout Italy, Germany, and France, and holding local synods along the way. Indeed, in the five and half years of his pontificate, Leo spent only six months in the city of Rome. Leo deposed immoral and corrupt bishops, and excommunicated clergy found guilty of simony or unchastity.

Leo’s eleventh-century reform illustrates that the discipline of celibacy was highly regarded in the medieval Church, and was not instituted to enrich it with the land of the clergy. The promise of celibacy freely taken by the clergy dates to the early Church and is rooted in Christian doctrine and tradition. As a discipline (not a doctrine), celibacy has developed through the centuries. In the first three centuries of Church history there was no law prohibiting the ordination of married men, and many priests were married; however, marriage was never permitted after ordination. Moreover, all priests—married, single, or widowed—practiced sexual abstinence after ordination. Indeed, the prohibition of marriage after ordination makes sense only if sexual abstinence was demanded even of married priests. St. Paul taught that a bishop should be the “husband of one wife,” meaning that a man who remarries after the death of his wife illustrated an inability to live conjugal abstinence as required by the Church.

The first recorded Church legislation mandating clerical celibacy in the West was decreed at the Synod of Elvira in Spain around the year 300. In the East, ordination of married men continued through the centuries (and remains a practice), but from the seventh century onward only celibate monks or priests were elevated to the episcopacy. And neither the Eastern nor the Western Church has ever allowed marriage after ordination. In 385, Pope Siricius (r. 384-399) mandated celibacy for all clergy in the West.

Although most people today think of celibacy as unique to Catholicism, conjugal abstinence was required of Jewish priests during their temple duty in Jerusalem, and pagan soldiers abstained from sexual intercourse before battle. Though the early Church permitted the ordination of married men, virginity for the sake of the kingdom of heaven was highly regarded. Men who left the world to seek closer union with God in the desert practiced celibacy, and in monasteries throughout the world it became the norm. Nor was celibacy limited to clergy in the early Church: women, both consecrated virgins and widows, pledged celibacy out of love for God. At the time of St. John Chrysostom (c. 347-407), there were 3,000 virgins and widows in Constantinople.

Despite the longstanding practice of the Church, celibacy was often not lived faithfully in the early medieval Church. Pope Benedict VIII (r. 1012-1024) held a synod at Pavia where he reinforced the rule of clerical celibacy and denounced the scandal of clerical marriage. By the time of Pope Leo IX in the mid-eleventh century, unchastity among the clergy was widespread. So many priests lived openly with mistresses or practiced the abhorrent vice of homosexuality that St. Peter Damian (1007-1072) wrote The Book of Gomorrah against the sexual sins of the clergy. The eleventh-century papal reform focused on ensuring the independence of the papacy from the interference of secular rulers, and was led mostly by popes who were former monks, free from the sins of secular (diocesan) clergy. These reform popes (St. Leo IX, St. Gregory VII, Bl. Urban II) recognized that reform in terms of the Church’s freedom from external secular control could be accomplished only if reform began in the Church, hence their focus on rooting out simony and unchastity among the clergy. Urban II captured the essence of the reform movement when he wrote, “The Church shall be Catholic, chaste and free: Catholic in the faith and fellowship of the saints, chaste from all contagion of evil, and free from secular power.”

The myth that the Church mandated clerical celibacy so as to acquire the property of priests’ families is rooted in a negative view of celibacy, and in the notion that the Church’s primary concern is to accumulate wealth and power. Such views were heavily influenced by the writings of Martin Luther (1483-1546).

In his 1520 treatise An Appeal to the Christian Nobility of the German Nation, Luther advocated a married clergy in his list of reform proposals. Luther wrote that the discipline of clerical celibacy was one of the causes of the Great Schism. He also said “not every priest can do without a woman, not only on account of human frailty, but much more on account of keeping house.” And he claimed, “The pope has as little power to command this [celibacy] as he has to forbid eating, drinking, the natural movements of the bowels, or growing fat.”

Luther’s attack on celibacy increased in ferocity the following year when he published On Monastic Vows, in which he opined that such vows had no basis in Scripture and were in conflict with charity and liberty. Under Luther’s influence, monks and nuns left their monasteries and convents in large numbers. One of those nuns, Katherine von Bora, would become Luther’s wife.

Finally, the Church did not require clerical celibacy to acquire land simply because it did not need to do so. Many large gifts of land were freely given to the Church by faithful men and women in gratitude for prayers answered or from a desire for prayers for their souls. And examples abound from the late eleventh century of men selling land to the Church to finance their participation in the Crusades.

The modern world struggles with this discipline of the Church, as did Luther. Many people see it as a punitive measure and something far too difficult to practice. Others view it as the reason for the clerical sex-abuse scandal in the early twenty-first century (see myth 47). But the main reason the modern world struggles with celibacy is that, since the Sexual Revolution, it rejects God’s plan for sexuality and marriage. Sex is viewed entirely through the selfish prism of pleasure, and treated like a recreational activity. The Church embraces celibacy in imitation of Jesus. Although the modern world views celibacy as giving up something, in reality it is a giving for something. Celibacy is a foreshadowing of eternal life in heaven where marriage is not practiced; celibate clergy and religious serve as living earthly witnesses of that reality.

The Real Story: Celibacy for Catholic clergy and religious is a longstanding discipline in the Church. Although married men were ordained to the priesthood in both East and West in the early Church, marriage after ordination was never permitted. Gradually, the discipline of celibacy for all clergy was implemented in the West, and was enforced from Rome by the end of the fourth century.

Unfortunately, there were periods in Church history when violations of celibacy were widespread and reform movements were necessary to enforce the practice. The Church did not use celibacy as a means to acquire land and property from a priest’s, monk’s, or nun’s family. Pious Christians donated land to the Church for a multitude of reasons. Martin Luther’s writings against a celibate clergy were foundational to Protestantism and led ultimately to the twentieth-century Sexual Revolution. Clergy and religious renounce marriage to serve the Church and its faithful more fully in imitation of Jesus Christ.

If you want to find out more, order your copy of The Real Story of Catholic History today!