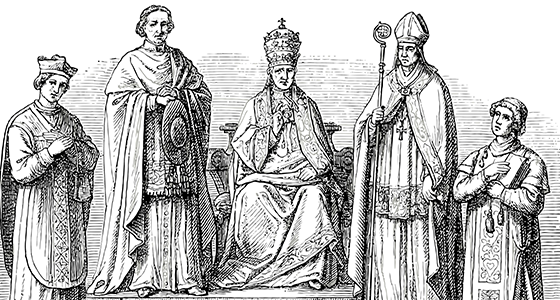 All of the evidence from the first few centuries of Christian writers either explicitly points to a threefold structure (one bishop, assisted by elders and deacons) in the early Church or is too vague to draw any reliable conclusions (usually because the author wasn’t directly writing about church governance). Sometimes, the evidence is murkier than we would like. But other times, we get a good look at a local church, and we invariably find that it’s governed by a single bishop, assisted by elders and deacons. Often, we even know the names of these early bishops, elders, and deacons. Catholics can accept all of the evidence, while Protestants have to reject all of the clear Catholic evidence and rely instead on arguments from silence.

David J. Stagaman notes that “by the early third century Hippolytus can take for granted that monoepiscopacy exists everywhere in the Church,” which can be explained in only one of two ways: either because the monoepiscopacy is what the apostles established, or because every church on earth changed its structure from whatever the apostles instituted to something else. And by this time, there are literally hundreds of churches. The historical theologian Margaret Miles points out that “in North Africa, one of the few places for which evidence exists, lists of hundreds of third-century bishops are extant; every small town had a bishop.”

Michael Kruger, who claims that “the first-century church was largely led by a plurality of elders/presbyters,” is forced to argue that “at some point during the second century, churches began to be ruled by a singular bishop (as opposed to a plurality of elders).” In other words, those arguing for the Protestant view have to tell a story of change. How and why did all of these churches abandon the apostolic structure of the church (including those churches personally founded by the apostles)? And here, Protestants encounter several problems. For one thing, there’s no actual evidence of this change occurring. You would think a church overthrowing an apostolic institution would make some kind of waves, yet we see no hint that the early Christians think this change occurred. In fact, they deny that their church changed structures, proudly pointing to the fact that they’re preserving what they received from the apostles (in contrast to the early heretics, who cannot make such a claim).

1. That the early Christians felt free to change the structure of the churches bequeathed them by the apostles;
2. That there were various types of church governance in the early Church; and
3. That for pragmatic reasons, every local church eventually decided on three-tiered governance headed by a single bishop (the technical term for this is monoepiscopacy).

But when we let the early Christians speak for themselves, we discover that they didn’t feel free to change the structure of the Church, or adopt the structure they thought best. Around the year 96, St. Clement of Rome writes a letter to the church in Corinth (a letter normally called 1 Clement, although it’s the only authentic letter we have of his). The letter begins:

The church of God which sojourns at Rome, to the church of God sojourning at Corinth, to them that are called and sanctified by the will of God, through our Lord Jesus Christ: Grace unto you, and peace, from Almighty God through Jesus Christ, be multiplied.

Owing, dear brethren, to the sudden and successive calamitous events which have happened to ourselves, we feel that we have been somewhat tardy in turning our attention to the points respecting which you consulted us; and especially to that shameful and detestable sedition, utterly abhorrent to the elect of God, which a few rash and self-confident persons have kindled to such a pitch of frenzy, that your venerable and illustrious name, worthy to be universally loved, has suffered grievous injury.

This tells us three important things. First, Clement is writing on behalf of the church of Rome. This will be an important and controversial point, as we’ll see a bit later. Second, the Corinthians have written to Rome (i.e., to Clement) in order to resolve an internal dispute, giving us an indication of the authority that the church of Rome and its bishop already possess at this time. And third, the problem facing the Corinthians is “sedition,” which Clement calls “shameful and detestable” and “utterly abhorrent to the elect of God.”

Did you enjoy this excerpt? Order your copy of The Early Church Was the Catholic Church today!