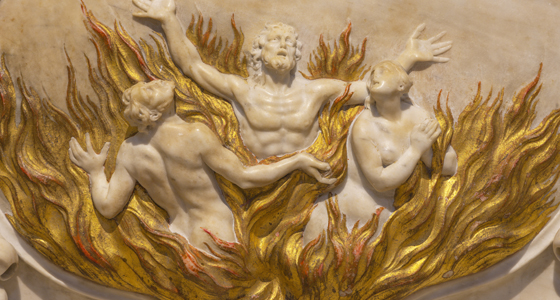 In a tiny little church on the banks of the Tiber, called the Church of the Sacred Heart of Jesus in Patri (also known as the Church of the Sacred Heart of Suffrage), there’s a most curious collection of artifacts from four different European countries (Belgium, France, Germany, and Italy) —sixteen pieces of cloth, paper, or wood, all of which are claimed to bear the signs of the scorched hands and fingerprints of souls in purgatory, a postmortem temporary state of existence where the souls of the elect imperfectly holy are purified of any remnants of sin.

Regardless of what you make of these so-called “relics” of purgatory, it does raise the question: Is purgatory for real? And if it is real, what’s it like?

To the question, “Is purgatory real?,” many say no. Protestant reformer John Calvin, for example, said purgatory is “a deadly fiction of Satan.” An Anglican theologian claims that purgatory is “a medieval invention that brought a new sense of order and purpose to previously vague notions of what life after death held in store.”

The Catholic Church definitively teaches that purgatory is real and claims that it can be supported by biblical revelation and early Christian testimony.

With regard to the nature of purgatory, questions abound: is it really just another chamber of hell that happens to be temporary? You might think it is, based on the not so few testimonies of saints and what has been emphasized in traditional catechism classes.

Other portraits of purgatory might not highlight the intense suffering but nevertheless suggest it’s gloomy. Perhaps it’s portrayed as an anteroom to heaven, where souls wander, like in (spoiler alert!) the TV series Lost. Or perhaps some catechist has taught you that purgatory is like a train you never get off, as one of my colleagues said he was taught.
Such depictions of purgatory make it sound as if purgatory were nothing but a realm of sorrow, where no joy whatsoever can be found. But such a state of existence is inconsistent with what the Bible promises the Christian as a citizen of Christ’s kingdom, which souls in purgatory are: “For the kingdom of God is . . . righteousness and peace and joy in the Holy Spirit” (Rom. 14:17).

As a reaction to such a dire portrait of purgatory, some end up on the other end of the spectrum, where suffering is eliminated entirely, and purgatory is said to be all joy and peace—nothing more than a clean-up job before entrance into heaven.

I’m here to tell you that purgatory is for real.

As to its nature, it does involve suffering. However, there is great joy to be found in purgatory that’s consistent with our life in Christ as Christians, and such joy gives proper context to the suffering involved. In fact, purgatory is a beautiful gift of God’s mercy for which we should be thankful, a joyful truth of God’s purifying love.

The Catechism of the Catholic Church defines purgatory as a postmortem “final purification” (1031) for “all who die in God’s grace and friendship [the elect], but still imperfectly purified” (1030) so that they may “achieve the holiness necessary to enter the joy of heaven.”

Throughout the centuries, the Church has identified three things that this postmortem purification accomplishes: the remission of the remaining guilt of venial sin, the purging of unhealthy attachments to created goods, and the discharge of remaining debt of temporal punishment due to past forgiven sins. This gives us a good working definition as to what we’re setting out to show is real.

The three joyful truths are:

• Purgatory is a doctrine of consolation for believers.
• Purgatory consists of joys that go beyond the joys of this world.
• Purgatory inspires the pursuit of holiness.

This should provide grounds to bring purgatory back onto the stage in the drama of the Last Things and present it as a truth that’s worth knowing and defending. There is no shame in professing the truth of purgatory.

My hope is that you will better appreciate the sweet reasonableness of purgatory and its truth as found in the biblical and early extra-biblical Christian sources. Also, my hope is that you come to see purgatory as a great gift that God in his mercy and love gives us. May we hear in the Church’s teaching on purgatory the words of Jesus: “I have said these things to you, so that my joy may be in you, and that your joy may be complete” (John 15:11).

If you want to find out more, pre-order your copy of Purgatory Is For Real today!