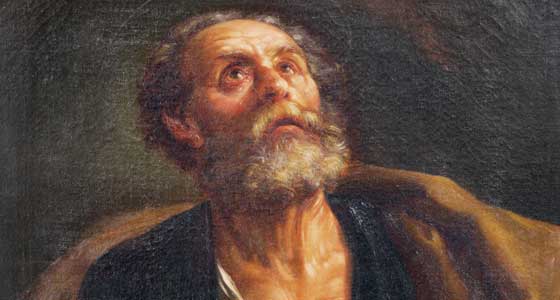 Before we get into the text of Acts, there are two very important questions that must be asked and that are often overlooked in this discussion: “Who wrote the Book of Acts?” And, “Why is that important?”

Well, the first question has an easy answer: “St. Luke wrote the Book of Acts.” It was basically a “part II” picking up where his Gospel leaves off.

But the second question is the more important question for our purpose: “Why is this important?”

It’s important because we know from Scripture that St. Luke was a companion of St. Paul. St. Paul calls him “the beloved Physician” in Col. 4:14, his “fellow worker” in Philemon 24, and he’s mentioned as St. Paul’s lone companion at the time he was writing II Tim. in II Tim. 4:11.

Now that is significant because St. Paul would have been St. Luke’s number one source of information for writing the Book of Acts. And St. Luke would have had a particular love and respect for St. Paul. And yet, when you thumb through the 28 chapters of the Book of Acts, for the first 15 of those chapters St. Peter dominates the narrative. He takes an obviously preeminent role.

You would think St. Peter was leader of the Church or something!

Now that point by itself it interesting, but when you get into the text of The Acts of the Apostles itself, Peter not only has a place of preeminence, but his leadership sticks out like the proverbial sore thumb.

In Acts chapter 1:12-22, the setting is immediately after the eleven apostles returned from having viewed our Lord’s ascension. We are seeing here what was—literally—the first order of business for the apostles after our Lord’s departure. The apostles are gathered with 120 of the faithful, but for brevity’s sake, I will only quote verses 15-22:

During those days Peter stood up in the midst of the brothers (there was a group of about one hundred and twenty persons in the one place). He said, “My brothers, the scripture had to be fulfilled which the holy Spirit spoke beforehand through the mouth of David, concerning Judas, who was the guide for those who arrested Jesus ... For it is written in the Book of Psalms: “Let his encampment become desolate and may no one dwell in it.” And: “May another take his office.” Therefore, it is necessary that one of the men who accompanied us the whole time the Lord Jesus came and went among us ... become with us a witness to his resurrection.

There are three point we want to focus on:

1) It is St. Peter who has clearly taken the helm in choosing and ordaining a new apostle to replace Judas. And, again, this is immediately after the Ascension of our Lord.

2) Notice St. Peter’s language. He does not ask the apostles for their opinions in the midst of giving his own. Not that he could not do that. He could. But here, St. Peter simply declares the truth of the matter in a definitive way.

3) Notice his definitive use of Scripture from the Old Testament. He quotes Psalm 69:26 and Psalm 109:8. To say these two verses are not exactly proof of the “perspicuity of Scripture” is an understatement (i.e., the idea that the “important things” in Scripture are easy to recognize by all!). If you look at the context of Psalm 69, leading up to Psalm 69:26 that Peter quotes, this Psalm speaks of the messiah’s persecutors who “give him gall for (his) food and sour wine to drink” – that’s in 69:22. Then the Psalmist prays that his persecutors be judged by God and prays, for example, that God would “Pour out [his] indignation upon them, and let [his] your burning anger overtake them” in verse 25, which leads up to the text cited that is actually in the plural in both the Masoretic text and in the LXX , saying, “May their camp be a desolation, let no one dwell in their tents,” in verse 26, which is quoted by St. Peter in the singular and applied to Judas. Then, he cites Psalm 109:8, which says, “May another take his bishopric,” from the LXX (the Masoretic text says “May they take his goods”.). That one is easier to see how it applies to Judas. But notice, there is no discussion of how the others might interpret these passages. Peter declares the truth of the matter. And he then declares the apostles must choose a replacement for Judas. There is never a question from the rest of the apostles, “Hey, Peter, that’s a pretty shaky interpretation of those two texts. What hermeneutical principles are you using, anyway?” St. Peter is clearly in charge and his word is deemed definitive.

And this is just the very beginning of the Book of Acts. It gets much better as we move forward!

Did you enjoy this excerpted lesson from Tim Staples' School of Apologetics course, Evidence for the Church? You can get it now for our lowest price of the year. Save $69.95 right off the bat, and another 10% when you enter Promo Code ENROLLNOW at Checkout!