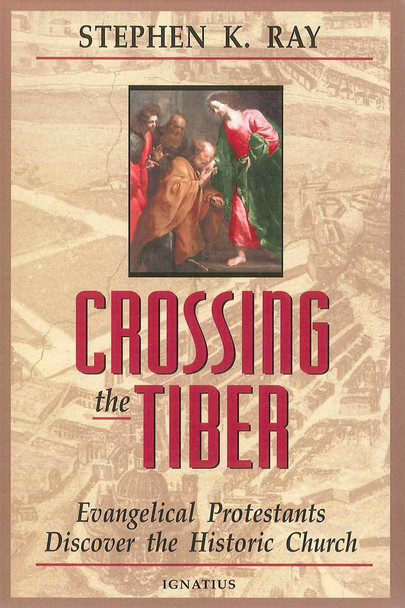 Stephen K. Ray was raised in a devout, loving Baptist family. His father was a deacon and led Bible studies. Steve himself was involved in the Baptist church as a teacher of Biblical studies, and he lectured on a wide range of topics.

In Crossing The Tiber, Ray shares with the reader their exhilarating discoveries. He convincingly lays out the issues that carried them over the "uncrossable chasm" and into the Catholic Church.

Thoroughly documented with over 400 footnotes, Crossing The Tiber contains an extensive compilation of Biblical and Patristic quotations and commentary on the issues of Baptism and the Eucharist, as well as a thorough analysis of Sola Scriptura and Tradition.

A must-read for those considering the claims of the Catholic Church.

Now: $16.95
Was:
The renaissance of Catholic apologetics has done great good for the Church. Ordinary Catholics are learning how to defend and explain the Faith—and to share it enthusiastically with others—more...

Now: $18.95
Was:
What if Protestantism were true? What if the Reformers really were heroes, the Bible the sole rule of faith, and Christ’s Church just an invisible collection of loosely united believers? As an...

Now: $18.95
Was:
What if Protestantism were true? What if the Reformers really were heroes, the Bible the sole rule of faith, and Christ’s Church just an invisible collection of loosely united believers? As...

Now: $16.95
Was:
For Protestants considering the Catholic Church, the journey across the Tiber River to Rome can be long and perilous, filled with many obstacles and detours. For Catholics who want to help them make...

Now: $19.95
Was:
What is in this book that has led so many Protestants to convert to Catholicism? What truths are revealed that has caused so many lapsed Catholics to return home? Find out for yourself when you read...

Now: $15.95
Was:
Deathbed Conversions contains the stories of famous people like John Wayne, Gary Cooper, Dutch Shultz, Patricia Neal, Oscar Wilde, and more -- we come to learn that a deathbed conversion is not a...