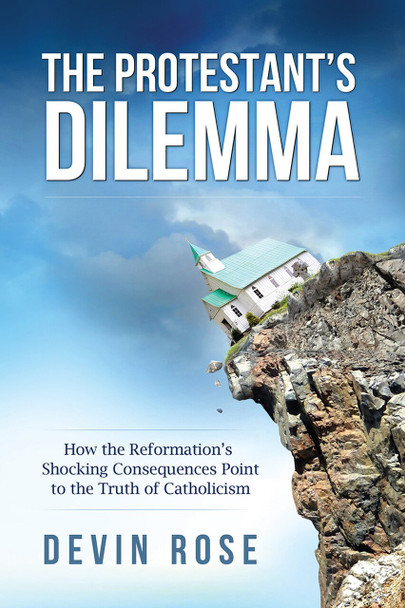 What if Protestantism were true?

What if the Reformers really were heroes, the Bible the sole rule of faith, and Christ’s Church just an invisible collection of loosely united believers?

As an Evangelical, Devin Rose used to believe all of it. Then one day the nagging questions began.  He noticed things about Protestant belief and practice that didn’t add up. He began following the logic of Protestant claims to places he never expected it to go—leading to conclusions no Christians would ever admit to holding.

In The Protestant’s Dilemma: How the Reformation's Shocking Consequences Point to the Truth of Catholicism, Rose examines over thirty of those conclusions, showing with solid evidence, compelling reason, and gentle humor how the major tenets of Protestantism—if honestly pursued to their furthest extent—wind up in dead ends of absurdity.

The only escape? Catholic truth, which Rose patiently unpacks. In each instance, he shows how Catholicism solves the Protestant’s dilemma through the witness of Scripture, Christian history, and the authority with which Christ himself undeniably vested his Church.

The Protestant’s Dilemma is the perfect book to give non-Catholics trying to work through their own nagging doubts, or for Catholics looking for a fresh way to deepen their understanding of the Faith.

“As a former Protestant pastor, I wish that I had read The Protestant Dilemma years ago. Devin Rose serves as a theological tour guide, leading the Protestant from the parlor of Martin Luther to the high altar of St. Peter’s Basilica. Along the way, he demonstrates that each and every step toward the Catholic Church conforms to Sacred Scripture and Church history. This is the guidebook to get you from the Reformation to Rome.” —Taylor Marshall, author of The Crucified Rabbi: Judaism & the Origins of Catholicism

“The Protestant’s Dilemma is different from other books written by Catholic converts. Devin Rose takes his reader on a dialectical journey, showing that the beliefs we share with our Protestant friends are only authoritative on ecclesiastical grounds that our Protestant friends reject. Working within the tradition of Socratic reasoning, Rose provides a compelling case for the Catholic Faith." —Francis J. Beckwith, Professor of Philosophy & Church-State Studies, and Co-Director of the Program in Philosophical Studies of Religion, Baylor University

Now: $26.95
Was:
What Did Early Christians Really Believe? The Answer Will Surprise and Amaze You!The Fathers Know Best: Your Essential Guide to the Teachings of the Early Church is a unique resource that introduces...

Now: $21.95
Was:
What does the Church teach about that? Sometimes this seems like a question with more than one answer. The Catholic Church claims to possess the fullness of Christian truth, but getting to the truth...

Now: $9.99
Was:
What if Protestantism were true? What if the Reformers really were heroes, the Bible the sole rule of faith, and Christ’s Church just an invisible collection of loosely united believers? As...

Now: $19.95
Was:
Did the Catholic Church add extra books to the Bible? Or did Protestant leaders have them removed? Find out the truth! Some differences between Catholicism and Protestantism can be tricky to...