Jimmy Swaggart Made Me Catholic (MP3) 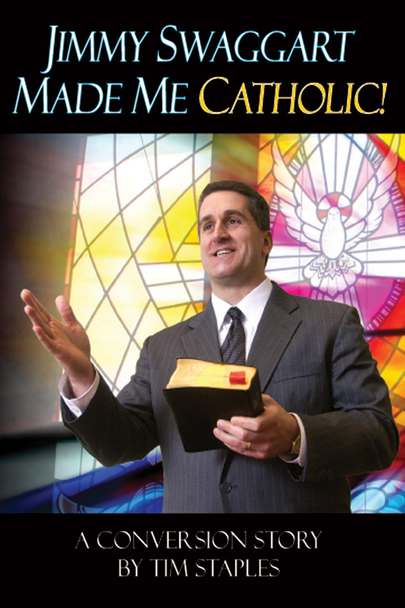 Jimmy Swaggart Made Me Catholic (MP3)

Tim Staples was your typical enthusiastic Protestant, on fire for his faith—until he met the "wrong" Marine: a Catholic man who was both willing and able to defend his faith.

How did Tim Staples, an extremely anti-Catholic man, get started on the path to Rome? What happened to cause the little boy who wanted to be a preacher just like Billy Graham to grow up and become a well-known Catholic apologetics speaker instead? How did the man Tim set out to "save" end up saving him? How can a Protestant Bible school be the place where the gift of Catholic faith is forged?

In Jimmy Swaggart Made Me Catholic, Tim tells you his story . . .

Listen to Tim Staples as he tells you the incredible story of his conversion—it's a story you won't soon forget.

$19.95
Now: $10.00
Was: $19.95
Tim Staples was your typical enthusiastic Protestant, on fire for his faith—until he met the "wrong" Marine: a Catholic man who was both willing and able to defend his faith. How did Tim Staples,...

$19.95
Now: $10.00
Was: $19.95
Tim Staples is a world-renowned author, speaker and thinker on the Catholic Faith—and listening to him speak, it’s difficult to believe that he wasn’t always that way. Join Tim as he relives his...

Now: $15.95
Was:
The Pope, devotion to Mary, confession ... just where are these topics in the Bible? Why does the Catholic Church seem to focus on so many things that aren t Scriptural? Or so thought former...

Jimmy Akin - The Greatest Scandal of All (MP3)

Now: $4.95
Was:
In this talk from Catholic Answers' 2013 National Apologetics Conference, Jimmy Akin tackles the hardest problem of all—why God allows evil in the first place.

$19.95
Now: $10.00
Was: $19.95
Tim Staples was your typical enthusiastic Protestant, on fire for his faith—until he met the "wrong" Marine: a Catholic man who was both willing and able to defend his faith. How did Tim...

Now: $13.95
Was:
When Jesus spoke of giving his body and blood for us to eat and drink, it scandalized some of his followers. How can a man give his flesh to eat? Even to this day, some Christians find Jesus’...