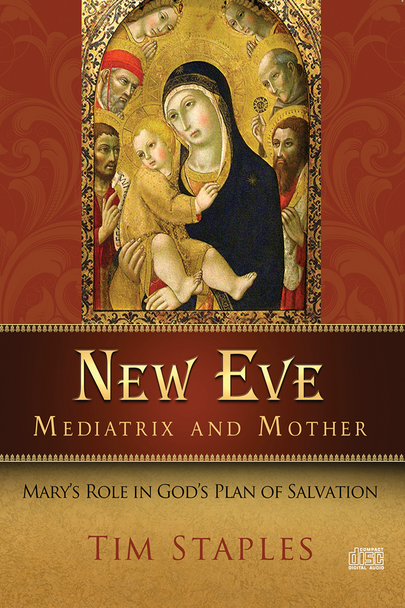 Tim Staples marshals the biblical evidence and reveals the critical importance of Mary’s unique and powerful role in God’s plan of salvation.

Fundamentalists and Evangelicals see Mary as little more than a receptacle for bringing Christ into the world. Catholic Answers’ Director of Apologetics Tim Staples strongly disagrees. As he points out, Mary’s role is unique in all of salvation history—in fact, the most important role ever given to a human being.

In Staples’ audio series New Eve, Mediatrix, and Mother you will discover...

The biblical and historical evidence is clear: Christ and the early Church both acknowledged and taught Mary’s critical part in God’s plan of salvation—a part that’s much larger and more important than even most Catholics know.

In New Eve, Mediatrix, and Mother, you can hear all about Mary’s role, discover why it’s so important, and learn to defend her against Protestant objections and misunderstandings.

$19.95
Now: $13.95
Was: $19.95
Tim Staples marshals the biblical evidence and reveals the critical importance of Mary’s unique and powerful role in God’s plan of salvation. Fundamentalists and Evangelicals see Mary as...

$13.95
Now: $6.95
Was: $13.95
Is Oprah Winfrey Leading People Away From Christ? Oprah has totally transformed herself and her media empire. She is no longer a microphone-toting interviewer of tearful guests and cheering...

$4.95
Now: $2.95
Was: $4.95
The “New Atheists” such as Richard Dawkins are hardly new. Their nineteenth-century counterparts also labored to conflate evolution and atheism. They met their match in the person of...

Now: $2.95
Was: $4.95
Using some of the earliest Christian writings as well as modern Church documents, Tim Staples shows the “organic connection between our spiritual life and the dogmas” (Catechism 89) and...

$17.95
Now: $10.95
Was: $17.95
The dogmas proclaiming Mary’s Immaculate Conception and her role as Mother of God may make sense to Catholics, but can they be explained to questioning Protestants? How should a Catholic...

Now: $8.95
Was: $13.95
When Jesus spoke of giving his body and blood for us to eat and drink, it scandalized some of his followers. How can a man give his flesh to eat? Even to this day, some Christians find Jesus’...

$17.95
Now: $8.95
Was: $17.95
Everything You Need to Know About Prayer to the Saints In the audio presentation Friends in High Places, Catholic Answers Director of Apologetics Tim Staples takes a stand against non-Catholic...

$17.95
Now: $10.95
Was: $17.95
Overwhelming Biblical and Historical Evidence Proves Both Mary's Perpetual Virginity and Her Assumption into Heaven For most Protestants—and even some Catholics—the Church's teachings...

$15.95
Now: $10.95
Was: $15.95
What every Catholic should know about two of the Church's most controversial and misunderstood teachings In the dynamic audio presentation, God's Perfect Plan, Catholic Answers apologist Tim Staples...

$19.95
Now: $13.95
Was: $19.95
Tim Staples marshals the biblical evidence and reveals the critical importance of Mary’s unique and powerful role in God’s plan of salvation. Fundamentalists and Evangelicals see Mary as...

$13.95
Now: $8.95
Was: $13.95
In Catholic Answers To Common Objections you and your non-Catholic friends will be staggered by the mountain of scriptural evidence Tim Staples has compiled to prove the truth of even the most...