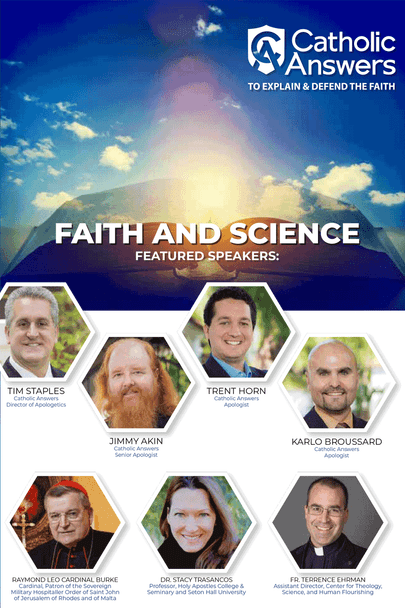 The “New Atheists” such as Richard Dawkins are hardly new.

Their nineteenth-century counterparts also labored to conflate evolution and atheism.

They met their match in the person of John Zahm—priest, scientist, philosopher, and South American explorer—who deftly untangled evolution from atheism.

Zahm’s arguments provide a response every bit as robust today to the New Atheists’ view of God and of science.

$13.95
Now: $6.95
Was: $13.95
Is Oprah Winfrey Leading People Away From Christ? Oprah has totally transformed herself and her media empire. She is no longer a microphone-toting interviewer of tearful guests and cheering...

$13.95
Now: $8.95
Was: $13.95
Tim Staples marshals the biblical evidence and reveals the critical importance of Mary’s unique and powerful role in God’s plan of salvation. Fundamentalists and Evangelicals see Mary...

What the Reformation Was All About (MP3)

$4.95
Now: $2.95
Was: $4.95
Jimmy Akin explores how a dispute about a minor doctrine became the powder keg of the Reformation, which blew apart the framework of Western Christian theology. As the crisis worsened, the...

$10.95
Now: $6.95
Was: $10.95
Today’s popular champions of atheism are often called New Atheists. But there’s nothing really “new” about their arguments. They’re the same basic objections to God that...

Talking To Kids About Chastity (MP3)

$4.95
Now: $2.95
Was: $4.95
What is science? How does the scientific method work? Are the results of science assured? Where are the flashpoints between science and faith? Why do scientists think the world is billions of...

$4.95
Now: $2.95
Was: $4.95
A common secular view of human beings is that we are the byproducts of chemical interactions in the brain. They determine everything we do and go out of existence forever once our brains die. But...

$4.95
Now: $2.95
Was: $4.95
For thousands of years, most people who read Genesis came to the conclusion that the world was created in six days, and just a few thousand years ago. Then modern science arose, claiming that the...

$4.95
Now: $2.95
Was: $4.95
Miracles are some of God's greatest gifts to the Church for evangelization, and yet Catholics seldom use them for that purpose. Tim will offer you a compendium of some of the most compelling...

How to Talk to Atheists (MP3)

$13.95
Now: $8.95
Was: $13.95
Have you heard these claims before? A good God would not allow innocents to suffer. Faith is purely subjective, like belief in Santa or the Tooth Fairy. Science has made faith obsolete. Or...

$10.95
Now: $6.95
Was: $10.95
Today’s popular champions of atheism are often called New Atheists. But there’s nothing really “new” about their arguments. They’re the same basic objections to God that...