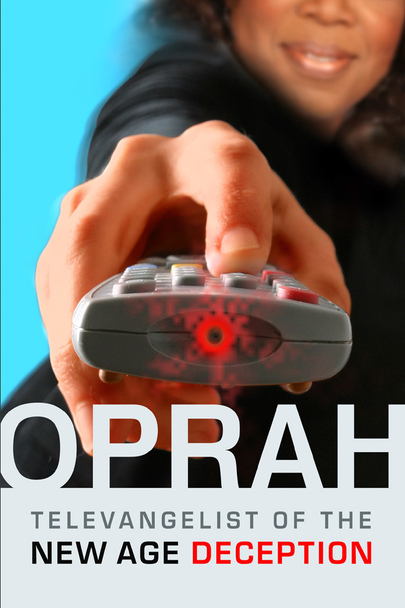 Is Oprah Winfrey Leading People Away From Christ?

Oprah has totally transformed herself and her media empire. She is no longer a microphone-toting interviewer of tearful guests and cheering audiences.

Believe it or not, she has become…a spiritual icon. Because of her, New Age teachings are being pitched to millions of our fellow Catholics—many of whom are being taken in by the mega-popular Oprah Winfrey and her promotion of three key books in the New Age Movement: The Secret, A New Earth, and A Course In Miracles.

Now that Oprah has become a New Age propagandist, we have a duty to expose her and her "guru" guests so that we can rescue Catholics and other Christians from this dangerous ideology...and prevent further damage from being done to her audience.

Oprah: Televangelist Of The New Age Deception is a fascinating 3-hour interview with Sharon Lee Giganti—a former New Age teacher who went through a dramatic realization that the ideas and the principles of the New Age Movement can have deadly consequences in people’s lives.

Now: $13.95
Was:
Tim Staples marshals the biblical evidence and reveals the critical importance of Mary’s unique and powerful role in God’s plan of salvation. Fundamentalists and Evangelicals see Mary as little...

Now: $4.95
Was:
Apologist Trent Horn talks to Fr. Paul Check on the topic of Homosexuality

Now: $4.95
Was:
The “New Atheists” such as Richard Dawkins are hardly new. Their nineteenth-century counterparts also labored to conflate evolution and atheism. They met their match in the person of John...

Now: $5.95
Was:
Every woman longs for love, but many have given up. In her presentation, Never Too Late, shared with several thousand young women, chastity speaker Crystalina Evert restores a woman’s hope...

Now: $13.95
Was:
Few Christian groups straddle that fine line between sect and denomination as does the Seventh-day Adventist (SDA) Church. On the one hand, its more than 20 million members profess belief in many...

Now: $13.95
Was:
Find out about a crucial moment in Catholic history! On October 7, 1571, the most important sea battle in history was fought near the mouth of what is today called the Gulf of Patras, then the Gulf...

Now: $4.95
Was:
“It may be true for you, but not for me.” How often have you heard this during a discussion with friends or family, or maybe in an online debate? Whether you’re talking about...