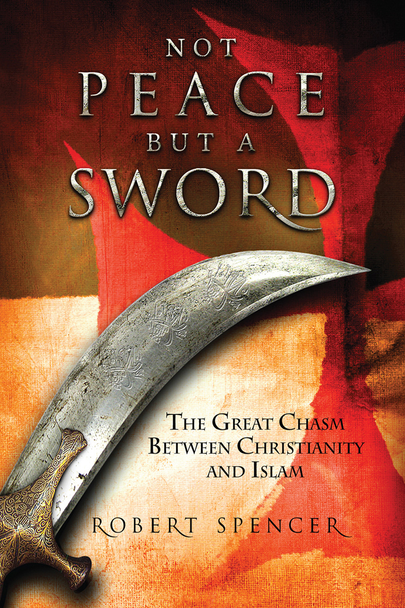 Islam...Is it a religion of peace?...Are muslims an easy ally in the fight against global secularization and the culture of death?...Are their beliefs really so different than our own?

Some Christians view Islam as a sister religion, a branch of the same Abrahamic tree—lacking the fullness of revelation but nonetheless a religion of peace. Others are more critical of Islamic teachings but still see Muslims as valuable partners in the global fight against secularization and the Culture of Death.

In Not Peace but a Sword, Robert Spencer argues they’re both wrong—and warns Christians against the danger of thinking that Islam is an easy ally. Many Christian groups, including the Catholic Church, do recognize whatever is good and true in Islam, and their leaders rightly pursue peaceful accord and common ground with all religions. Spencer argues, however, that real peace can come only from truth.

Where there is falsehood in Islamic doctrine, morals, and practice, papering over the truth actually hurts the cause of peace. And so Spencer, the New York Times best-selling author of more than a dozen books dealing with Islam and the West, shines the light of truth on areas where Christians and Muslims don’t just quibble over small details but fundamentally disagree, including: The character of God, Jesus, and divine revelation The nature of truth and the source of moral law Religious freedom and other basic human rights Life issues, marriage, and sexual morality The rights and dignity of women

He demonstrates how these differences are not academic but real-world. They are critical and drive Muslim behavior toward Christians and others.

If we fail to open our eyes to these differences, we do so at our peril.

The Sword of the Spirit

I Burned for Your Peace: Augustine's Confessions Unpacked

Now: $18.95
Was:
Popular author and philosopher Peter Kreeft delves into one of the most beloved Christian classics of all time--Augustine's Confessions. He collects key passages and offers incisive commentary,...

A Mind at Peace: Reclaiming an Ordered Soul in the Age of Distraction

Now: $14.95
Was:
These past two decades, modern technology has brought into being scores of powerful challenges to our interior peace and well-being. We’re experiencing a worldwide crisis of attention in which...

Now: $17.95
Was:
"Stand therefore, having girded your loins with truth…And take…the sword of the Spirit, which is the word of God." (Ephesians 6:14–17) Are you ready to do battle against the forces of heresy and...

Now: $1.99
Was:
Islam: A Catholic Perspective provides a concise overview of Islam -- and evaluates their history and beliefs from a Christian point of view. Using a balanced approach, this booklet gives Islam...

Now: $12.99
Was:
With book, Converts And Kingdoms, historian Diane Moczar has written a marvelous book about great converts who changed not just the Church but also the destiny of human civilization. In her...

The Glory of the Crusades (Digital)

Now: $12.99
Was:
How can the Crusades be called “glorious”? Our modern mindset says they were ugly wars of greed and religious intolerance—a big reason why Christians and Muslims today can’t...

Now: $12.99
Was:
In his bestseller Memorize the Faith!, Kevin Vost rediscovered a memory method invented by the ancient Greeks and perfected by medieval scholars, and showed twenty-first-century Catholics how to use...

Now: $4.95
Was:
There are two universal themes in human experience: 1) We all seek true, lasting happiness, and 2) We have trouble finding it, because the world is a messed-up place. In times of turmoil, when...

Counterfeit Christs: Finding the Real Jesus Among the Impostors (Digital)

Now: $12.99
Was:
Jesus asked his disciples, “Who do you say that I am?” Turns out that today, as back then, this question has a lot of different answers. So many groups want to appropriate...