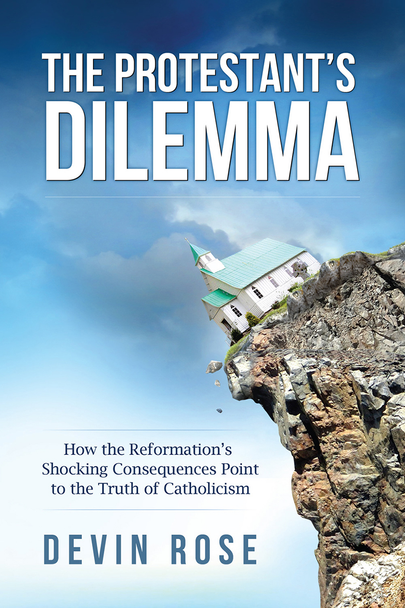 What if Protestantism were true?

What if the Reformers really were heroes, the Bible the sole rule of faith, and Christ’s Church just an invisible collection of loosely united believers?

As an Evangelical, Devin Rose used to believe all of it. Then one day the nagging questions began. He noticed things about Protestant belief and practice that didn’t add up. He began following the logic of Protestant claims to places he never expected it to go—leading to conclusions no Christians would ever admit to holding.

In The Protestant’s Dilemma, Rose examines over thirty of those conclusions, showing with solid evidence, compelling reason, and gentle humor how the major tenets of Protestantism—if honestly pursued to their furthest extent—wind up in dead ends of absurdity.

The only escape? Catholic truth, which Rose patiently unpacks. In each instance, he shows how Catholicism solves the Protestant’s dilemma through the witness of Scripture, Christian history, and the authority with which Christ himself undeniably vested his Church. The Protestant’s Dilemma is the perfect book to give non-Catholics trying to work through their own nagging doubts, or for Catholics looking for a fresh way to deepen their understanding of the Faith.

Now: $15.95
Was: $18.95
What if Protestantism were true? What if the Reformers really were heroes, the Bible the sole rule of faith, and Christ’s Church just an invisible collection of loosely united believers? As an...

Now: $4.95
Was:
The Gathering Place of God’s Family How do we know Jesus founded a visible, organized Church? Is today’s Catholic Church the same as the church of the apostles and the early Christians?

Can A Catholic Be A Socialist? (Digital)

Now: $12.99
Was:
Common Sense About the Common Good Pope Leo XIII wrote of the “harvest of misery” that socialism brings. Pius XI said that it’s impossible to be a good Catholic and a good socialist. John Paul II...

Now: $15.95
Was: $18.95
What if Protestantism were true? What if the Reformers really were heroes, the Bible the sole rule of faith, and Christ’s Church just an invisible collection of loosely united believers? As...

Now: $6.99
Was:
Wouldn’t it be great to have a book to give non-Catholic or ex-Catholic friends and family to explain exactly why we believe what we believe? The good news is that now there is! Why...

Now: $12.99
Was:
Every Catholic has heard the challenge: “How can you believe that? Don’t you know the Bible says…” It’s a challenge we have to meet. If we can’t reconcile...

Purgatory Is For Real (Digital)

Now: $12.99
Was:
To some, the Catholic doctrine of purgatory is murky and mysterious—even scary. What is this shadowy state between earth and heaven supposed to be? Others wonder how it’s even possible...

The Drama of Salvation (Digital)

Now: $12.99
Was:
Where Will You Spend Eternity? The drama of salvation involves every man, woman, and child on earth. In this life, all of us are suspended between heaven and hell. To rescue us, God sent his...

Now: $12.99
Was:
What Did Early Christians Really Believe? The Answer Will Surprise and Amaze You! The Fathers Know Best: Your Essential Guide to the Teachings of the Early Church is a unique resource that...

Now: $12.99
Was:
In his bestseller Memorize the Faith!, Kevin Vost rediscovered a memory method invented by the ancient Greeks and perfected by medieval scholars, and showed twenty-first-century Catholics how to use...