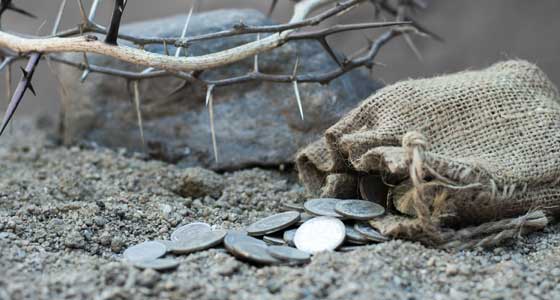 CHALLENGE: Matthew and Luke contradict each other. Matthew says that the field of blood got its name because it was bought with blood money (Matt. 27:6-7), but Luke says it was called this because people knew Judas died a gruesome death there (Acts 1:18-19).

DEFENSE: Names can have more than one significance, and the two explanations are compatible.
The fact that Matthew and Luke record different expressions of the tradition regarding Judas’s fate indicate that both were in circulation.

There are parallels to this elsewhere in the Bible. The biblical authors and their audiences often saw a single name as having more than one significance.

For example, the name of the city Be’er-sheva can mean “Well of the Seven” or “Well of the Oath,” and the author of Genesis preserves more than one tradition regarding its significance. He notes that at this location Abraham dug a well, gave Abimelech seven lambs, and swore an oath with Abimelech (Gen. 21:30-32). He also notes that Isaac later dug a well and swore an oath with Abimelech there (Gen. 26:31-33). Ancient readers of Genesis were thus aware of both traditions and saw them as complementary explanations for the name of Be’er-sheva: It was called that for both reasons.

Similarly, the field of blood was so called both because it was bought with blood money and because of Judas’s death. (Note that Luke says Judas bought a field, that he died a bloody death, and that people thus called the place “field of blood,” but he doesn’t say Judas died there. He may or may not have.)

One explanation would have originated first, but both were in circulation in the first century, and both contributed to why people called the field what they did.

If you enjoyed this excerpt, and want to find out more, order your copy of A Daily Defense