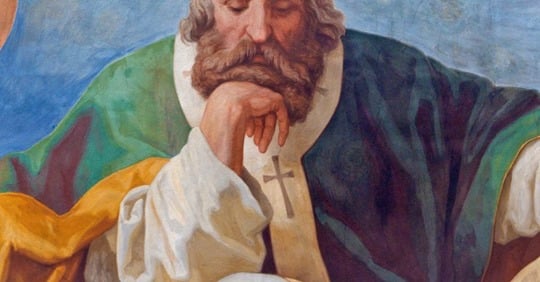 At first, the apostles conducted their teaching mission in a purely oral form. Peter preached a sermon on Pentecost.

He did not issue a pamphlet.

By teaching orally, the apostles followed the example of Jesus, who didn’t author any books, letters, or treatises. Only once do the Gospels mention Jesus writing, and that was with his finger on the ground (John 8:6, 8).

Communicating God’s word orally was the most effective way to do it. The great majority of people—even in Israel—were illiterate. If you wanted to reach them with the message of salvation, it had to be orally.

The fact the Christian message was given orally rather than in writing means it was a matter of Tradition. Certainly, parts of Christian teaching could be found in the Old Testament scriptures that pointed forward to Jesus, but the actual story of who he was, what he taught, and what he did for us by his cross and resurrection went beyond what had been written before. Tradition was the means by which the core message of our faith was preached.

This didn’t mean all traditions were good, or that traditions should be accepted uncritically. During his ministry, Jesus had criticized the Pharisees for inventing new traditions that either went beyond or even contradicted God’s commandments (Mark 7:1-13). He thus censured them for holding “the tradition of men” (Mark 7:8).

But traditions of men and Tradition handed down from Christ and his apostles are two different things! The first Christians recognized that the latter were not only binding on us but also essential for our faith and practice.
Consider the practice of St. Paul. Prior to the writing of the New Testament, he delivered the Christian message in the form of Tradition in the cities where he founded churches; and in the letters he later wrote to these churches, he instructed them on the proper attitude toward these traditions.

In 1 Corinthians 11:2, Paul tells his readers, “I commend you because you remember me in everything and maintain the traditions even as I have delivered them to you.” He tells the Thessalonians, “Stand firm and hold to the traditions which you were taught by us, either by word of mouth or by letter” (2 Thess. 2:15). And he says, “Now we command you, brethren, in the name of our Lord Jesus Christ, that you keep away from any brother who is living in idleness and not in accord with the tradition that you received from us” (2 Thess. 3:6).

Some today don’t like the concept of Tradition, and some modern Bible translations—especially in the Protestant community—try to obscure the fact that the New Testament speaks positively of tradition when it is passed down from Christ and the apostles. They do this by using the word tradition when Jesus criticizes the Pharisees but substituting another word—like teaching, ordinance, instruction, or truth—when the New Testament praises Christian Tradition. This creates the false impression that, for the New Testament authors, tradition is a negative concept, but the underlying word in Greek (paradosis) is the same in all these passages.

Protestant translations that substitute another word for tradition in some or all of the protradition verses include the King James Version, the New International Version, the Good News Bible, the New Living Translation, and Young’s Literal Translation. However, stopping to think for a moment about the fact that Christianity preached for years before the New Testament underscores the importance of Tradition for the Christian faith.

If you enjoyed this interview and want to find out more, order your copy of The Bible is a Catholic Book today!
Also available in Bulk Cases of 20 for $60 ($3 each) CLICK HERE