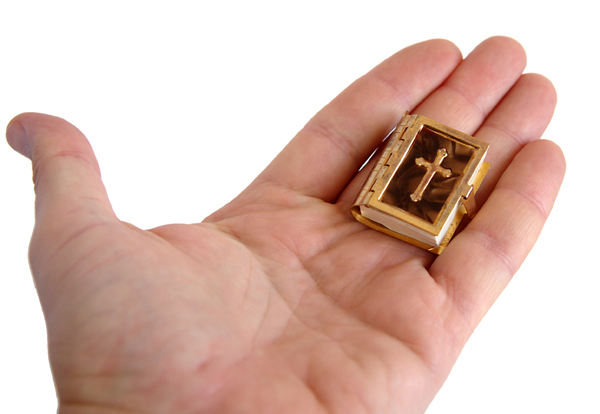 We recently sat down with Catholic Answers Senior Apologist Jimmy Akin, to talk about why the Bible is a Catholic book.

Q. Our Protestant friends often speak of “the word of God” as if it was limited to just the Bible. Is that true?

Jimmy: No. The Bible speaks of the “word of God” as being several different things. It certainly includes the Bible, but it also includes the word of God communicated to people orally—in the form of Tradition, as when the apostles preached the word to people before the New Testament was written, or when the prophets preached God’s word before any book of Scripture was written. The ultimate Word of God is Jesus himself, so we can’t limit the word of God to just the Bible.

Q. Jesus condemned the Pharisees for “making void the word of God” by their tradition. Does that mean all Tradition is bad?

Jimmy: Just because one group misuses tradition doesn’t mean that all tradition is bad. Elsewhere, the New Testament speaks highly of the traditions that come from the apostles, and it commands Christians to honor them whether they are written in the Bible or not. The tradition of the Pharisees isn’t binding on us, but the Tradition of the apostles is!

Q. Our Protestant friends say we should base our doctrine on “Scripture alone.” What’s wrong with this idea?

Q. Some anti-Catholics say that the Catholic Church “hates” the Bible and tried to keep it from the people. How can we reply to that?

Jimmy: If the Catholic Church “hated” the Bible, then it wouldn’t have laboriously hand-copied Bibles in the long centuries before the invention of the printing press. Further, the monks wouldn’t have made the beautiful, illuminated Bibles, whose pages they literally covered in gold by applying gold leaf to the illustrations to honor God’s word.

Q. When were the Gospels written? Are they late documents written long after the life of Jesus?

Jimmy: As biblical scholarship has progressed, the dates for the Gospels have been steadily rolled back. You no longer have scholars saying they were written a hundred or more years after Jesus. Today, virtually all scholars acknowledge that they were all written in the first century, and the best evidence indicates that they were written between about A.D. 55 and 65—only around twenty to thirty years after Jesus’ ministry.

Q. Did all Jews in Jesus’ day honor the same books as Scripture?

Jimmy: No. Different groups of Jews had different opinions about which books were sacred, and most did not have a single, closed list or “canon” of biblical books. The precise boundaries of the Old Testament continued to be debated in Jewish circles for centuries.

Q. Why does the Bible contain the books that it does? How did we get the exact list of books it has today?

Jimmy: God guided the Church, over the course of centuries, to recognize certain books and not others as being written expressions of his word. On the human level, this was done through the teachings of the Magisterium—the popes and the bishops. The Catholic Church thus played a crucial role in identifying the books of the Old and New Testaments.

Q. Why do our Protestant friends have smaller Bibles?

Jimmy: Martin Luther and other early Protestant leaders rejected certain Catholic teachings, such as purgatory, which is strongly supported in the Old Testament book 2 Maccabees. They therefore appealed to the European Jews of their day, who didn’t honor 2 Maccabees and certain other books as Scripture. They thus removed certain books from the Protestant Bible that Christians had historically regarded as Scripture.

Q. Bottom line: Why is the Bible a Catholic book?

If you enjoyed this interview and want to find out more, order your copy of  The Bible is a Catholic Book today!