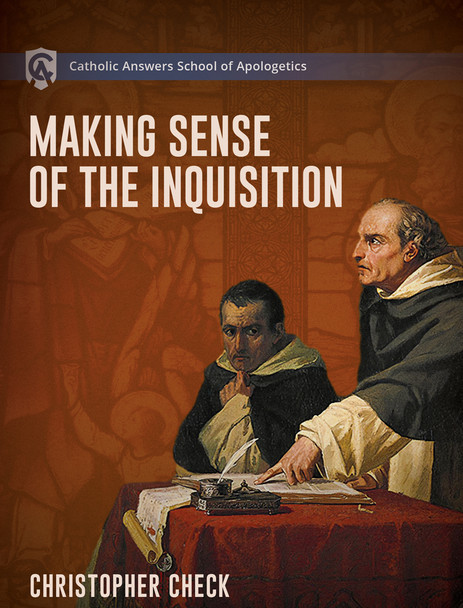 There may be no event in Church History so fraught with controversy as the Inquisition. The topic is often used to discredit the Catholic Church, too frequently by people whose own knowledge of the relevant circumstances and events is thin. In Making Sense of the Inquisition, you will learn what the Medieval, Spanish, and Roman Inquisitions were, their origins in Scripture and Roman jurisprudence, why they came into practice, and how they functioned.

The student who devotes the time and effort to acquiring a better sense of these events in Church history will be equipped to:

-Discuss the Inquisition honestly and irenically.

-Explain that  to medieval man, heresy was no mere difference of opinion, but a dangerous and violent thing that tore asunder the political and cultural life of a Christian kingdom.

-Defend the good motives and often merciful actions of the men and women involved in these events, without feeling the need to justify their periodic excesses.

-Show that the Inquisition not only save souls but also preserved the social fabric of Spain long after most of Europe’s countries were afflicted by Protestant rebellion.

*Bulk Pricing for Parish or Classroom use is available. Please call our Customer Service Team at 1-888-291-8000 for more information.

Now: $39.95
Was: $119.95
Moral Apologetics Online Course Description If you faithfully live out the Catholic Church’s moral

$39.95
Now: $29.95
Was: $39.95
There may be no event in Church History so fraught with controversy as the Inquisition. The topic is often used to discredit the Catholic Church, too frequently by people whose own knowledge of the...

Catholic Answers School of Apologetics: Creation Out Of Nothing Online Course

Now: $29.95
Was: $39.95
Creation Out of Nothing Online Course Description Is our world just an accident or did God create it from nothing? And is this just an article of Faith, or can we use reason and evidence to prove...

Now: $29.95
Was: $39.95
The Galileo Affair is the go-to event cited by enemies of the Catholic Church as hard evidence that she is opposed to scientific learning. The facts of the story do not support this narrative...

Now: $19.95
Was: $39.95
You may be passionately pro-life, but do you get nervous about sharing your views with pro-choice friends or family members? Do you worry that the conversation will become a heated argument that...

Now: $29.95
Was: $39.95
Almost everyone has heard of the Crusades, but few people can say what they were or how they came about—and few Catholics are informed enough to explain and defend them. This course will enable...