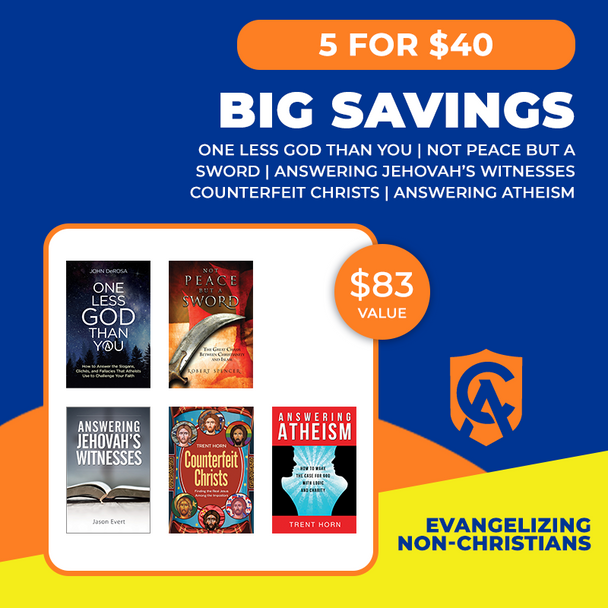 Dealing with non-Catholics can be difficult, even more so when there's little common ground to work with. These 5 great volumes will give you what you need to answer some of the more common objections and questions you'll come across.

Now: $18.95
Was:
One of the ways Jesus answered his critics was to use their own words against them—to show how even the enemies of the Faith admitted crucial facts that undermined their own position. That’s a...

Now: $15.95
Was:
How can Catholics explain what the Church teaches about the relationship between science and faith? Scientist, writer, and scholar Stacy Trasancos gives us ways we can talk about how science and our...

Now: $19.95
Was:
What is in this book that has led so many Protestants to convert to Catholicism? What truths are revealed that has caused so many lapsed Catholics to return home? Find out for yourself when you read...

Now: $14.95
Was:
The title explains itself. But it’s misleading. There are more than 40 reasons. In fact, there are at least ten to the 82nd power, which, we are told, is the number of atoms in the universe. And...

Now: $18.95
Was:
Common Sense About the Common Good Pope Leo XIII wrote of the “harvest of misery” that socialism brings. Pius XI said that it’s impossible to be a good Catholic and a good socialist. John Paul II...

Now: $50.00
Was: $93.00
This collection will give you what you need to answer the tough questions - About Mary, Sola Scriptura, the Bible, the Papacy, and Purgatory. Purgatory Is for Real: Karlo Broussard definitively...

Now: $50.00
Was: $93.00
Dialoguing with Protestants can be difficult, but with this handy Survival Kit on your bookshelf you'll be able to answer the tough questions. Meeting the Protestant Challenge: Karlo Broussard...

Now: $30.00
Was: $48.85
Get Our 3 Newest Titles From Spring 2021: A Teacher of Strange Things by Cy Kellett: Cy takes you on a journey of discovery, helping you see with fresh eyes the once-familiar Jesus Christ. If you...

Now: $50.00
Was: $101.75
Perfect for the Church history lover on your list! Five of our very best Church history titles at a savings of over 50%! The Early Church Was the Catholic Church by Joe Heschmeyer Light From...

Now: $30.00
Was: $71.85
Three of Jimmy Akin's Biggest Bestsellers - Over 50% Savings! The Fathers Know Best A Daily Defense Teaching With Authority

Now: $50.00
Was: $99.75
Are anti-Catholic Myths the original "Fake News"? Anti-Catholics like to paint Church teachings in a way that makes them seem vain, backward, or superstitious, all in the hope of drawing people out...

Now: $30.00
Was: $58.85
There's no better way to learn about the Holy Family than our new Holy Family Pack! A Teacher of Strange Things: Who Jesus Was, What He Taught, and Why People Still Follow Him: In A Teacher of...