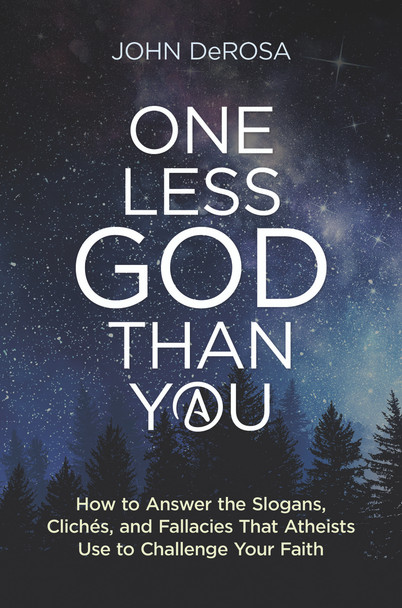 “The God of the Bible is a bloodthirsty dictator.”

“Religion is the cause of war, suffering, and intolerance.”

“Do you believe in Santa Claus, too?”

If you have spent any time on Twitter, in a college quad, or at the dinner table with a freshman philosophy major, you’re probably familiar with the litany of slogans that religious skeptics employ in an attempt to rescue you from the foolish belief that God exists.

Even our public schools and mainstream media often can’t help but parrot the tropes and memes that seem to leave thinking people with no alternative but to embrace atheism.

How can a Christian respond?

You can ignore them—but then you miss a chance to evangelize and to strengthen your own faith. You can spend years mastering theistic apologetics before you reply—but that takes, well, years. Or you can let John DeRosa (Classical Theism) help. In One Less God Than You, he breaks down twenty of the most common atheist challenges, exposes their substantive and logical weaknesses, and shows you how to craft effective answers.

Atheism is more aggressive and widespread than ever before, so we believers have a crucial task before us. Read One Less God Than You and prepare yourself to respond with the joyful truth that God is real.

"If every Christian adult and teenager read this book, atheism would lose most of its attractive power. These slogans are slinged and parroted across the internet as if they present serious blows against Christianity. But as John DeRosa shows here, they're typically shallow and juvenile. Read this book, understand these atheist objections, and you'll never be afraid of them again." -- Brandon Vogt, founder of ClaritasU and author of Why I Am Catholic

Now: $19.95
Was:
Tired of being stumped when false claims are made about the Catholic Church? Want to be armed with knowledge that puts these mistruths to rest? In these pages, veteran apologist Gerard Verschuuren...

Now: $19.95
Was:
Welcome to the Catholic Church!Now that you're officially a Catholic, you are probably wondering, "Now what?"Shaun McAfee has been where you are. As a convert, he worried that he might not be a "good...

Now: $16.95
Was:
The greatest teacher who ever lived, Jesus knew how to reach his audience where they were at. Whether preaching to a group in parable or holding an intimate conversation, he had an unequaled ability...

Now: $18.95
Was:
Common Sense About the Common Good Pope Leo XIII wrote of the “harvest of misery” that socialism brings. Pius XI said that it’s impossible to be a good Catholic and a good...

One Less God Than You (Digital)

Now: $12.99
Was:
“The God of the Bible is a bloodthirsty dictator.” “Extraordinary claims require extraordinary evidence.” “Religion is the cause of war, suffering, and intolerance...