Revolt Against Reality: Fighting the Foes of Sanity and Truth - From the Serpent to the State (Digital) 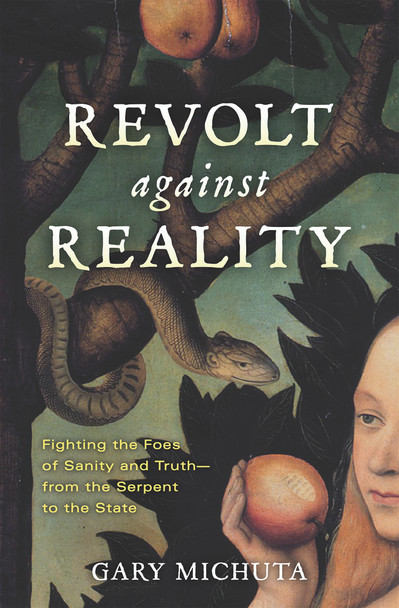 Revolt Against Reality: Fighting the Foes of Sanity and Truth - From the Serpent to the State (Digital)

We seem to be living in an age of insanity. Crimes against children, born and unborn; marriage defiled and redefined; the madness of transgenderism; the looming terror of trans-human-ism . . . the list goes on and on. And it’s getting uglier out there every day. Everywhere you look, the culture is twisting truth into lies and lies into truth.

How did we get to this bizarre point in history? More importantly, how can we fight the tide of insanity and win reality back?

In Revolt Against Reality, Gary Michuta (Hostile Witnesses, Why Catholic Bibles Are Bigger) explains how an army of liars, manipulators, and bad actors has conspired literally from the beginning to thwart God’s plan for man—a plan of order and peace, centered on the Incarnation of Jesus Christ. Michuta takes you step by step through history, unmasking the enemies of faith and reason in every age—all the way back to Satan himself, who in the Garden of Eden promised that we could become our own gods.

Since then, every error, heresy, and moral abomination has been part of the same intricate network of lies, designed by the Father of Lies, to wrench us from what makes sense and trap us in a prison of contradiction and chaos.

We’ll never restore sanity to the world until we know how the enemy operates. Read Revolt Against Reality and you’ll understand his age-old tactics . . . and you’ll be prepared to fight back!

Now: $18.95
Was:
One of the ways Jesus answered his critics was to use their own words against them—to show how even the enemies of the Faith admitted crucial facts that undermined their own position. That’s a...

Now: $21.95
Was:
What was the early Church like? Contrary to popular belief, Rod Bennett shows there is a reliable way to know. Four ancient Christian writers—four witnesses to early Christianity —left us an...

These Twelve: The Gospel Through the Apostles' Eyes

Now: $18.95
Was:
The Men Were the MissionOne, holy, Catholic… and apostolic Church? Catholics often overlook that last part. And Protestants tend to downplay its importance, treating the apostles as accidental...

The Drama of Salvation - Paperback

Now: $19.95
Was:
Where Will You Spend Eternity? The drama of salvation involves every man, woman, and child on earth. In this life, all of us are suspended between heaven and hell. To rescue us, God sent his...

The Early Church Was the Catholic Church (Digital)

Now: $12.99
Was:
When it comes to the history of Christianity, the Catholic Church makes a pretty bold claim: that the earliest Christians were Catholics—and that their beliefs and practices have continued...

The Early Church Was the Catholic Church (Case of 20 Books)

Now: $60.00
Was: $339.00
When it comes to the history of Christianity, the Catholic Church makes a pretty bold claim: that the earliest Christians were Catholics—and that their beliefs and practices have continued...

Now: $20.00
Was: $65.75
Just in time for Pentecost! What's in the box? It's a mystery! Celebrate the birth of the Church with this selection of five apologetically awesome books! A guaranteed great deal - A $60 value...

Now: $3.95 - $4.95
Was:
Show your support with these handsome stickers! These stickers are printed on durable, high opacity adhesive vinyl which makes them perfect for regular use, as well as for covering other stickers or...

Early Church Pack - Buy These Twelve And Get The Early Church Was the Catholic Church Free!

Now: $18.95
Was: $35.90
Take yourself back to the birth of the Church! In These Twelve, you’ll delight in Bennett’s trademark storytelling style as he movingly depicts what it was like to witness Jesus’...

Revolt Against Reality: Fighting the Foes of Sanity and Truth - From the Serpent to the State

Now: $18.95
Was:
We seem to be living in an age of insanity. Crimes against children, born and unborn; marriage defiled and redefined; the madness of transgenderism; the looming terror of trans-human-ism . . . the...