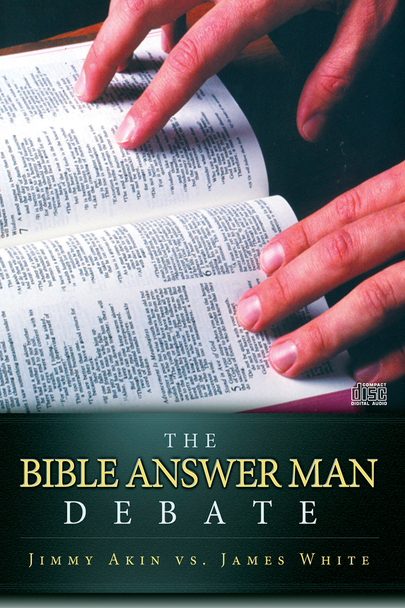 Imagine having a front-row seat to a high-powered debate between an Evangelical Bible teacher and a Catholic apologist. That's what you'll have in The Bible Answer Man Debate.

This unique debate occurred on Protestant turf, with "Bible Answer Man" Hank Hanegraaff serving as moderator. The central differences between Catholics and non-Catholic Christians are tackled in this series of debates between Jimmy Akin, apologist extraordinaire for Catholic Answers, and James White, director of the Evangelical apologetics organization Alpha and Omega Ministries.

These informed and articulate speakers draw on Scripture, early Church history, and contemporary theologians to support their views. As Hanegraaff points out, they do so without rancor or ad hominems, enlightening listeners from all Christian traditions.

Topics covered include: the problems with "Bible Only" (sola scriptura) theology, private interpretation of Sacred Scripture, non-Catholic misinterpretation of the veneration given Mary, the Protestant notion of justification by faith alone (sola fide), merit, grace, and purgatory, misunderstandings of the papacy, and many more. Informative for Catholics and eye-opening for other Christians, this debate series is a must for your apologetics library!

Now: $4.95
Was:
God’s Written Word What does it mean to say that Scripture is “inspired”? Why don’t Catholics believe that the Bible is the sole rule of faith? Do Christians

Now: $15.95
Was:
Listen to a Catholic and an Evangelical go head-to-head in a series of 4 lively debates. In Staples vs. Gregg, Catholic apologist Tim Staples and Evangelical Steve Gregg face-off on these...

Now: $0.99
Was:
Can the Catholic doctrine of purgatory be found in 1 Corinthians 3, which speaks of a man being tested and saved “through fire”?   In this stirring debate from the Dividing Line...

Now: $15.95
Was:
Catholic apologist Jimmy Akin sits down with Evangelical author Steve Gregg in a friendly but lively five-round debate over many of the issues that separate Protestants and Catholics. The subjects...