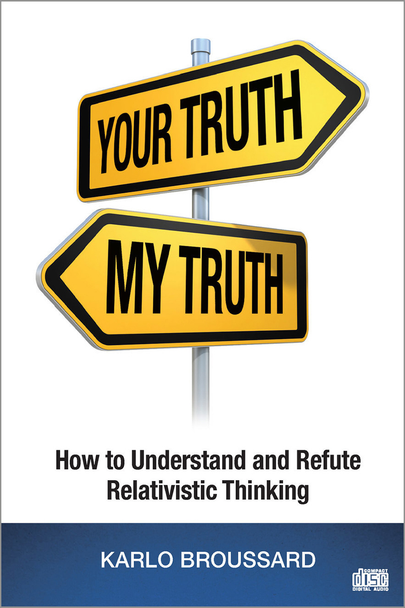 How often have you heard this during a discussion with friends or family, or maybe in an online debate?

Whether you’re talking about faith, morality, politics, or just the basic notion of truth, it seems that so many people are captive to the notion of relativism—the belief that reality is something we decide rather than discover.

In Your Truth, My Truth, Catholic Answers apologist Karlo Broussard breaks down this modern intellectual cancer that has infected schools, courts, and even churches throughout the Western world.

He examines the different kinds of relativism that most of us regularly encounter, explaining the arguments made by their proponents and showing you how to refute them. And he demonstrates how, ultimately, all these forms of relativism collapse under the weight of their own incoherence.

Most importantly, Karlo then makes a powerful case for the existence of objective truth. He shows you how to explain to others that true and false, right and wrong are both real and universal, because they are rooted in the nature of the way things are—a nature that is knowable by everyone, because it was designed that way by God.

The good news, Karlo points out, is that most people already know this to some degree, even if they don’t realize it. Listen to Your Truth, My Truth and learn how to help them more fully understand the beauty of the truth we all share.

Now: $5.95
Was: $7.95
Have you noticed how some of the New Atheists don’t even bother trying to disprove God’s existence? Your arguments in favor of God don’t even deserve a reply, they say, because not only does God not...

Now: $4.95
Was:
“That’s true for you, but not for me!” In Refuting Relativism you’ll learn how to refute relativist slogans and provide compelling evidence for the objective truth of the...

Now: $1.99
Was:
You may have heard of the acronym LGBT, but did you know the full acronym (LGBTQQIP2SAA) includes things like pan-sexuality, gender fluidity, and intersex?  In A Catholic Guide to LGBT+ you'll...

Trent Trax Episode 1: How to Win Any Abortion Debate (MP3)

Now: $1.99
Was:
Abortion is being debated on-air, online, and in person more than ever before, and in this in-depth talk Trent Horn prepares you to face the most common arguments in the abortion debate...