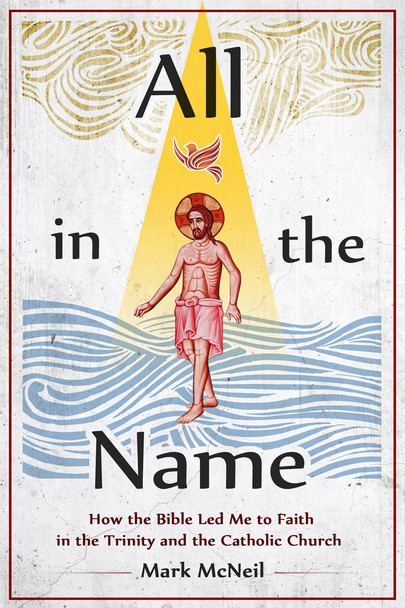 Mark McNeil spent years in the Oneness Pentecostal movement: praying in its lively services, zealously spreading its unconventional teachings, and rejecting mainstream Christianity as misguided. He even graduated from a Oneness Pentecostal Bible college with big plans to become a minister and leader within the movement.

Then he left it all behind.

In All in the Name, Mark tells his story first of trading his conventional Baptist upbringing for the emotional buzz and fiery preaching of Oneness Pentecostal worship, and for the thrill of thinking that he was among an elite group of believers who followed the true faith where so many others had strayed. His experience echoes that of many other Christians who are leaving orthodox Christianity for a growing movement that claims:

But an inquisitive mind, careful study, and the action of the Holy Spirit finally led Mark out of Oneness Pentecostalism and into the Catholic Church. A faith-strengthener for Catholics and an intriguing challenge to those who reject the Trinity, All in the Name is at once an inspiring human story of conversion and a powerful apologetic for orthodox belief on God, Jesus, and salvation.

Now: $29.95
Was:
Being Catholic isn't easy.  Every Catholic will come face-to-face with anti-Catholic attacks that are launched against the Faith.  Don't you owe it to yourself to make sure you have the...

All In The Name (Digital)

Now: $9.99
Was:
Mark McNeil spent years in the Oneness Pentecostal movement: praying in its lively services, zealously spreading its unconventional teachings, and rejecting mainstream Christianity as misguided. He...

Now: $4.95
Was: $19.95
“Whatever I have learned,” writes Karl Keating, “I have learned from masters of the craft.” In this delightful and engaging memoir, the father of the modern Catholic...

Jimmy Akin - The Greatest Scandal of All (MP3)

Now: $4.95
Was:
In this talk from Catholic Answers' 2013 National Apologetics Conference, Jimmy Akin tackles the hardest problem of all—why God allows evil in the first place.

Mass Appeal: The ABC's of Worship

Now: $3.95
Was:
A concise, informative explanation of the Mass in just 32 pages. Revised For The New Mass TranslationIn the new revised edition of his booklet from Catholic Answers, Mass Appeal: the ABC's of...