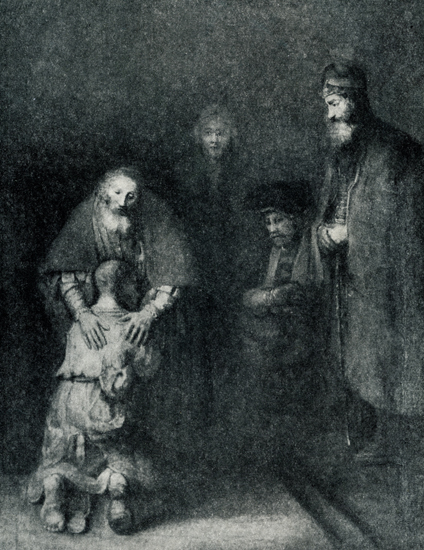 Even read merely as a piece of literature, the parable of the prodigal son is starkly beautiful. But when read as the word of God, it bears the power of eternal salvation to those who read it with an open heart.

A certain man had two sons. And the younger of them said to his father: “Father, give me the portion of the substance that falls to me.” And he divided his substance to them. And not many days later, the younger son, gathering everything together, went abroad into a far country; and there wasted his substance, living irresponsibly. And after he had spent everything, there came a great famine in that country; and he began to be in want. And he went and cleaved to one of the citizens of that country. And he sent him into his farm to feed swine. And he longed to fill his belly with the husks the swine were eating, but no one gave him anything. And returning to himself, he said, “How many hired servants in my father’s house abound with bread, and here I perish with hunger. I will arise and go to my father, and say to him: ‘Father, I have sinned against heaven and before you. I am not worthy to be called your son. Make me as one of your hired servants.’” And rising up he came to his father.

And when he was still a long way off, his father saw him, and was moved with compassion. And running to him, he fell upon his neck and kissed him. And the son said to him: “Father, I have sinned against heaven and before you. I am not now worthy to be called your son.” And the father said to his servants: “Quickly, bring forth the first robe, and put it on him; and put a ring on his hand, and shoes on his feet. And bring here the fatted calf, and kill it, and let us eat and make merry. Because this, my son, was dead and is come to life again; he was lost and is found.” And they began to make merry.

Now the elder son was in the field. And when he drew near to the house, he heard music and dancing. And he called one of the servants and asked what these things meant. And he said to him: Your brother has come, and your father has killed the fatted calf, because he has received him safe. And he was filled with wrath and would not go in. Therefore, his father coming out began to entreat him. And he, answering, said to his father: “Look, for so many years I am serving you, and I have never transgressed your commandment. And yet you have never given me a young goat to make merry with my friends. But as soon as this, your son, is come, who has devoured his substance with harlots, you killed for him the fatted calf.”

But he said to him: “Son, you are always with me, and all I have is yours. But it was fitting that that we should make merry and be glad, for this, your brother, was dead and is come to life again; he was lost and is found” (Luke 15:11-32).

Joseph and the Prodigal Son

Consider these parallels between their stories:

That’s not just three or four parallels—that’s at least eight! There are so many exact parallels that one cannot doubt that our Lord intended for us to consider his parable side by side with the story of Joseph.

But in spite of the parallels, the differences are also striking:

What does this all mean?

Christ is the key that unlocks all of Scripture.

The father in the history of Joseph represents Adam, the human origin of Christ, and from the beginning Christ is clothed with the robe of human nature upon coming into the world at the Incarnation. As man he takes no wife, resisting the inclination of human nature to be joined to a woman. He departs this world unwillingly at his passion, crying out “Father, if it be possible, let this chalice pass from me” (Luke 22:42). But he enters into the next life, a land far from this. He dwells in prison there only for a short time, for “he went and preached to the spirits in prison” (1 Pet. 3:19). Then, at his resurrection and ascension, he is raised up to the right hand of the throne of God the Father.

For in the story of Joseph, Pharaoh represents God the Father. Thus, the ring given to Joseph by Pharaoh symbolizes the eternal divinity and its union with Christ’s humanity, since a ring is circular, having no beginning or end, signifying eternity. And just as Pharaoh makes Joseph second in the kingdom, yet in such a way that he exercises the full authority of the King, so too does God the Father establish Christ at his right hand, exercising his full authority. From there Christ feeds hungry souls with bread from heaven, nourishing them with his own glorious flesh and blood. Finally, he welcomes tearful Adam with an embrace and a kiss, and leads Adam and all his children into heaven.

The Father in the parable of the prodigal son is God the Father. His homeland signifies heaven, while the far-off land signifies this fallen world. Christ willingly departs from his heavenly home so that he might come to save us here in this fallen world, so far off from heaven. Upon coming into the world, Christ hungers and thirsts, experiencing famine while he lives in the “likeness of sinful flesh” (Rom. 8:3). He spends all and, in his divinity, he draws near to prostitutes and sinners, allowing them to be intimate with him in supernatural love. But having emptied himself and having taken “the form of a slave (Phil. 2:7),” he subjected himself to the slavery of death, he rises up again and returns to his Father, receiving the glorious robe of his resurrected body together with a ring that signifies the manifestation of his eternal divinity. He is welcomed by his Father into his original, heavenly home, where he shall forever rejoice in the heavenly banquet.

There is some question about who the envious older brothers represent in each story. In the story of Joseph, it seems that the envious older brothers are the leaders of the Jewish people: “he perceived that it was out of envy that the chief priests had delivered him up” (Mark 15:10). In the story of the prodigal son, I think the envious older brother can represent the devil. The scriptures tell us that the devil was envious (Wis. 2:24). But how can he be called older than the divine Word, since the Word existed before all creatures? Because he is old not in time, but in sin (see Daniel 13:52), which is why St. Paul calls the man subject to sin the “old man” (Rom. 6:6). Again, because the divine Word is eternally begotten of the Father, his begetting is eternally new: “This day I have begotten you” (Acts 13:33; Heb. 1:5; 5:5). And just as one who is further from birth is called older, so too all creatures are old in comparison to the Word who is eternally, newly begotten.

So there you have it. It is the same story. Sacred Scripture is truly miraculous. It is the word of God...

If you want to find out more, order your copy of Secrets From Heaven today!