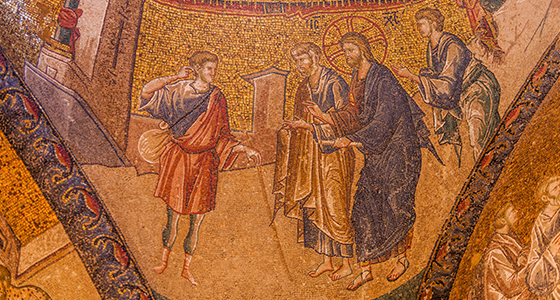 And people brought to him a deaf man who had a speech impediment
and begged him to lay his hand on him.
He took him off by himself away from the crowd.
He put his finger into the man’s ears
and, spitting, touched his tongue;
then he looked up to heaven and groaned, and said to him,
“Ephphatha!” (that is, “Be opened!”)
And immediately the man’s ears were opened,
his speech impediment was removed,
and he spoke plainly. - Mark 7:31-37

Before Jesus did any teaching at all, he did miracles.

Isaiah had promised recovery of sight to the blind and that the ears of the deaf would be unstopped, the lame made to leap like deer— a miracle-worker, in other words. And now here Jesus was, working the promised miracles.

For the disciples, all of this must have happened awfully fast. Before his teaching began in earnest with the Sermon on the Mount, before they even got to know him at all, with hardly a word of explanation from the man himself the future apostles watched dozens and dozens of signs and wonders take place at the Nazarene’s command.

It is important to realize that the early chapters of the four Gospels contain a truly unprecedented outpouring of the miraculous.

Jesus of Nazareth may well have performed twelve an hour some days. Nearly forty, at any rate, are individually described in the Gospels, but the actual total is impossible to calculate. They came in such a flood that large numbers of them are often lumped together in indefinite masses, as Luke relates: “He came down with them and stood on a level place, with a great crowd of his disciples and a great multitude of people from all Judea, Jerusalem, and the coast of Tyre and Sidon. They had come to hear him and to be healed of their diseases . . . And all in the crowd were trying to touch him, for power came out from him and healed all of them” (Luke 6:19). This is but one of fifteen or so similar passages.

So when our Lord did finally begin to teach his disciples, we may be sure that he had their full attention. In their eyes, he was no longer auditioning for the part; they had ceased comparing him to the Baptist or, indeed, to any other prophet. The eruption of miracles had simply blown all quibbles away. They still entertained, to be sure, half-a-dozen contradictory ideas about the role he had come to play, but now they considered the puzzle from a new position: sitting at his feet—figuratively and then often literally speaking.

Author Rod Bennett puts you right in that inner circle of the Apostles in his new book, TheseTwelve: The Gospel Through the Apostles Eyes. Order your copy today!