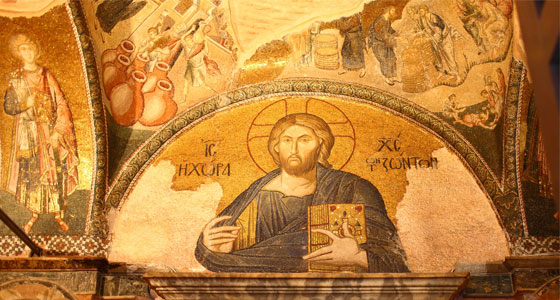 When I was in the seminary at the Pontifical North American College in Rome, one of my apostolates was to give English-speaking tours of St. Peter’s Basilica. In such a role, I encountered people of every sort and kind. Every week, parts of the world passed through my tour of the basilica.

In my tour, since we were on “home turf,” I attempted to give a full summary of the Christian faith through the architecture, art, monuments, and history of this universally esteemed and recognized house of worship.

If a tour was going particularly well and the people were interested and engaged, then I would add a few parts. One of those extras was the Altar of the Lie. This is the altar immediately across from the entrance to the sacristy. The altar depicts the death of Ananias and Sapphira (Acts 5:1-11). It was placed near the sacristy, where priests would prepare for worship, so that as the priest left the sacristy to go to an altar to offer Mass, he would see it and be reminded of his call to have a purity of intention while offering the sacrifice.

On one occasion, I took a very interactive tour group to this altar. While in front of the massive and beautiful mosaic of the scene, I recounted the incident from the Acts of the Apostles: a husband and wife separately lied to the apostles about money received from a sale of land, and both were struck dead for their deception. The story greatly disturbed one woman listening. She shook her head and blurted out, “God wouldn’t do that.”

The interruption caught me off guard, but I smiled gently and tried to clarify. “Yes, I know it can be a surprise when we see God exercise justice.”

The woman was unrelenting and retorted, “God wouldn’t do that. He’s not like that.”

I then assumed a lack of knowledge and followed up with, “Well, ma’am, the Acts of the Apostles is a part of the New Testament, which is a part of the Bible. It’s through the Bible that we truly know who God is.”

Her reply shouldn’t have shocked me, but it did: “Well, my God wouldn’t do that. He’s a God of mercy.”

Regrettably, due to the nature of a tour, I wasn’t able to give more of a reply at the time. I offered to speak with the woman afterward, but she disappeared.

I give this story here because the woman was expressing a particular point but also a general one. The specific point is whether God would exercise justice in this way. The broader point is how we can know God and how God has spoken to us of himself and whether we will accept this revelation. It is this broader point that I want to stress here.

God is real. Divine revelation is God’s self-initiated disclosure of his own knowledge of himself to the human family. This disclosure is an unveiling of himself. In modern terms, we would say his revelation is an intimate sharing of himself with humanity. Due to our fallen nature, which is inclined to the influence of sin and error, the broad knowledge we have of God through the natural light of reason depends upon God’s supernatural revelation. It is God’s supernatural revelation that provides for us the interior knowledge of himself that is above reason and which we could have only as a gift from him. And so, our sure knowledge of God hinges upon and comes from God’s revelation.

Under the guidance of the Holy Spirit, God’s revelation is contained in Sacred Tradition and Sacred Scripture. It is authentically interpreted and applied to modern life by the ordained shepherds chosen by God.

If we attempt to portray God in opposition to his revelation, we are creating an idol. If we adjust his revelation or attempt an “upgrade” by modern standards, we are fashioning our own deity. If we rely on our emotional needs or worldly, fallen perceptions of virtue in approaching God, then we are worshipping only projections of ourselves. These are all offensive to true revelation since they dismiss the identity of the true God and replace him with what we think he should be. The standard is backward; the approach is upside-down; the result is idolatrous and tragic.

In the story above, the woman had fashioned her own idol. Even when revelation called her to re-evaluate her views, and to wrestle with and accept the gift of sure knowledge of who God is, she declined and chose instead to create her own god. She chose to worship her own creation rather than her true Creator. Sadly, in this way, she is a sign of our age.

How are we to understand revelation? How can it lead us to a true knowledge and worship of the living God?