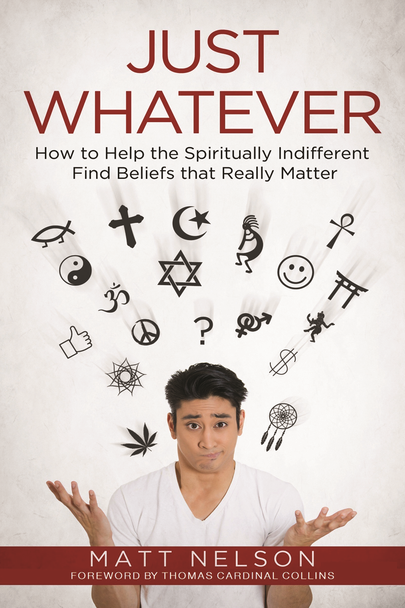 What difference does it make?
Sharing the Faith used to make some people mad because it challenged and clashed with their own strong beliefs. Today it makes a lot of people yawn—because they don’t have strong beliefs about anything.

Catholic Apologist Matt Nelson says this religious indifference is the great spiritual sickness of our age—a product of the relativism that dominates modern culture. If you find fulfillment in your faith or lifestyle, great, the idea goes; but that doesn’t mean it’s true for me or anyone else. The consequences of this mentality are all around us: a neglect of truth, apathy towards the important questions in the universe, and—since we’re designed to be fulfilled by God, not idle pleasures—widespread unhappiness.

In Just Whatever, Matt takes down the building blocks of religious indifference one by one. He looks at the three different kinds you tend to encounter in your friends and family members—and maybe in yourself!—to see where they come from and why they’re seductive. In their place he offers a compelling vision of a world in which it matters what you believe, who you worship, and where authentic truth and authority reside. And he helps you present that vision to others with clarity and love.

"I've engaged lots of atheists over the years but in my experience, the spiritually indifferent outnumber them at least five to one. And that latter group is much harder to evangelize. Most atheists at least care about the God question. But how do you make inroads with someone who isn't at all interested in religious matters? It's a vexing question, but now we have our desperately needed guide. Matt Nelson's book shows how to awaken interest in even the most spiritually lethargic person and guide them to the Big Questions of life. This is Pascal's Pensées for the twenty-first century!" - Brandon Vogt, founder of ClaritasU and author of Why I Am Catholic (And You Should Be Too)

"In today's highly secularized society where religion does not seem to matter, it is easy for Christians to feel overwhelmed and be led into thinking they do not have answers to the countless objections people have toward the Church.  Matt’s clear and simple explanation of the good reasons for our faith will provide readers with well thought out responses." - Andre Regnier, Founder of Catholic Christian Outreach Canada

“Many of us have converted to the Catholic Church; others were born into the Catholic faith and accepted it without question. But as time passes and the world entangles us the fervor can wane for the convert and the certainty can dissipate for the cradle Catholic. What is the spiritual medicine for these ailments? Matt Nelson’s new book Just Whatever is the doctor’s prescription. Read this book, learn from an experienced fellow pilgrim and get back on track, fervent for the Truth.”
- Steve Ray, Catholic apologist and author of Crossing the Tiber

"Who cares?" That question has become the mantra of a cynical generation of people who call themselves seekers, but rarely seek beyond the mirror. Matt Nelson has the antidote to all the apathy with Just Whatever, an intellectual stampede through an eclectic array of sources. If you want a practically irresistible set of motives for caring about the claims of Christ and the Church, look no farther. - Patrick Coffin, Host, The Patrick Coffin Show

"Indifference is much harder to address than anger. The angry atheist shares at least one belief with the Christian apologist: that the issues we raise are important. But how do we reach the person who doesn't care or thinks the answers don't matter? Apologists today must be prepared to start before square one, showing that the questions about God, Jesus, and the Church are meaningful and important - so that it becomes worthwhile to find out if they are true. Matt Nelson takes on this challenge in Just Whatever, presenting key arguments for the existence of God, the divinity of Jesus, and the truth of the Catholic Church in a way that addresses the context of pervasive indifferentism in our culture. This book, drawing on philosophical, historical, theological, and literary texts, and written in an engaging and accessible style, will be a valuable addition to the bookshelves of the Catholic apologist." - Dr Holly Ordway, author of Apologetics and the Christian Imagination: An Integrated Approach to Defending the Faith

Prepare the Way: Overcoming Obstacles to God, the Gospel and the Church (Digital)

Now: $9.99
Was:
Sharing the gospel with family and friends (or a stranger on the computer screen) can be challenging enough. When they won’t even hear you out, because of all the mental roadblocks...

Now: $9.99
Was:
What if Protestantism were true? What if the Reformers really were heroes, the Bible the sole rule of faith, and Christ’s Church just an invisible collection of loosely united believers? As...

Now: $15.95
Was:
Jesus—Buddha—Allah—Sex—God—Self—Stuff—Drugs—Tech—Prayer—Tunes—Catholic—Christian—Spiritual—None What difference...

Now: $15.95
Was:
Jesus—Buddha—Allah—Sex—God—Self—Stuff—Drugs—Tech—Prayer—Tunes—Catholic—Christian—Spiritual—None What difference...

Prepare the Way: Overcoming Obstacles to God, the Gospel and the Church (Digital)

Now: $9.99
Was:
Sharing the gospel with family and friends (or a stranger on the computer screen) can be challenging enough. When they won’t even hear you out, because of all the mental roadblocks...

$9.95
Now: $7.99
Was: $9.99
A generation ago, Christian parents didn’t have to worry about how to explain transgenderism to their nine-year-old, or help their teenager deal with mockery at school for believing in...

Now: $0.99
Was:
Islam: A Catholic Perspective provides a concise overview of Islam -- and evaluates their history and beliefs from a Christian point of view. Using a balanced approach, this booklet gives Islam...

Now: $9.99
Was:
In his bestseller Memorize the Faith!, Kevin Vost rediscovered a memory method invented by the ancient Greeks and perfected by medieval scholars, and showed twenty-first-century Catholics how to use...

Now: $9.99
Was:
What does the Church teach about that? Sometimes this seems like a question with more than one answer. The Catholic Church claims to possess the fullness of Christian truth, but getting to the truth...

Now: $4.99
Was:
Wouldn’t it be great to have a book to give non-Catholic or ex-Catholic friends and family to explain exactly why we believe what we believe? The good news is that now there is! Why...

Now: $9.99
Was:
Have you ever read something in the Bible that made you just scratch your head? Has a skeptic ever challenged you to defend a seemingly scandalous verse of Scripture? You’re not alone...