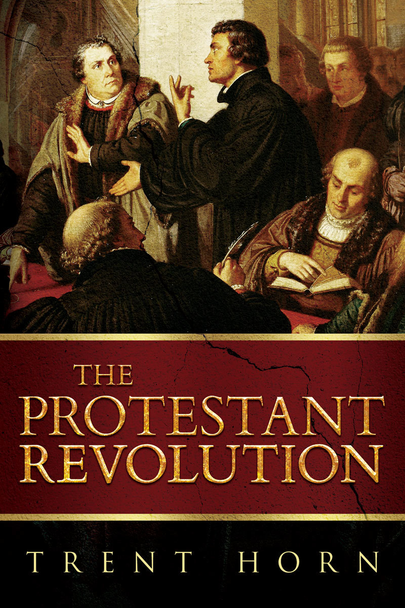 October 2017 marks the 500th anniversary of the Protestant Reformation, when, as the story goes, Martin Luther nailed a list of his grievances with the Catholic Church (commonly called "The 95 Theses") to the door of All Saints’ Church in Wittenberg, Germany.

In the documentary-style film The Protestant Revolution,  written and narrated by Trent Horn, you will be introduced to Martin Luther and the events that shaped his thinking and led him to “protest” against his Catholic Faith.

The film investigates common myths about the Reformation and the key ideas Luther espoused that resulted in the breaking away of believers and the establishment of non-Catholic Christian religions—ideas still firmly at the heart of modern Protestant theology. These include:

Along the way you’ll hear from top apologists Tim Staples, Jimmy Akin, Karlo Broussard, and Steve Weidenkopf as they unpack the misguided ideas of Luther, leaving you with a clearer understanding of your Protestant brothers and sisters and better equipped to engage them about what separates us and what unites us.

Now: $12.99
Was:
What if Protestantism were true? What if the Reformers really were heroes, the Bible the sole rule of faith, and Christ’s Church just an invisible collection of loosely united believers? As an...

Now: $4.95
Was:
Separated at Baptism How did Protestant Christianity begin and spread? What are the distinctive beliefs of Protestantism, and how do they differ from Catholic teaching? How do &ldqu

Now: $12.99
Was:
Every Catholic has heard the challenge: “How can you believe that? Don’t you know the Bible says…” It’s a challenge we have to meet. If we can’t reconcile apparent contradictions between Scripture...

Now: $12.99
Was:
When Protestants Strike Back…Thanks to apologetics, millions of regular Catholics have learned to give good reasons for the things they believe, usually to Protestants who challenge their faith with...

3 Secrets To Sharing The Faith (Digital)

$5.99
Now: $5.95
Was: $7.95
Want to tell others about your Catholic faith, but don’t how where to start? Afraid you’re not smart enough, knowledgeable enough, outgoing enough? Don’t worry, says Catholic...

Now: $12.99
Was:
What if Protestantism were true? What if the Reformers really were heroes, the Bible the sole rule of faith, and Christ’s Church just an invisible collection of loosely united believers? As...

Now: $5.95
Was: $7.95
The book of Revelation is the most mysterious book of the New Testament—and it’s often used to attack the Catholic Church. Opponents of the Church claim that it is the...

The Case Against Contraception (Digital)

Now: $5.95
Was: $7.95
Is the Church wrong on contraception? In a world that practically worships the pursuit of sexual pleasure, the Catholic Church’s teaching on contraception can seem unintelligible. Critics say...

Now: $5.95
Was: $7.95
God Loves Your Children More than You Do! Raising kids Catholic is difficult. As parents, we know in our hearts that it’s the right thing—the only thing—to do; but, if we’re...

Now: $5.95
Was: $7.95
The most common charge non-Catholic Christians make against the Catholic Church is that the tenets of Catholicism are man-made and unbiblical.Those are serious charges, for sure. But...

Why Be Catholic? (Digital)

Now: $5.95
Was: $7.95
Don't you wish everyone you knew was Catholic?In his groundbreaking DVD, Why Be Catholic?, Catholic Answers Director of Apologetics Tim Staples, offers an engaging and simple solution:...