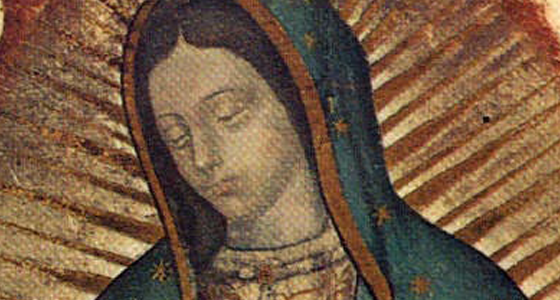 There were actually two apparitions of Our Lady of Guadalupe more than two centuries apart. In 1326 in Cácerces, Spain, according to legend, the Virgin Mary appeared to a cowherd named Gil Cordero as he searched for a lost cow. The Virgin led him to a mound of stones where he saw his cow lying motionless as if dead. Cordero was preparing to cut off its hide when it awoke. Mary told him to dig at the spot.

Skeptical at first, local authorities dug to remove the stones and found a cave that contained a statue with an ancient document explaining its origin: it was a famous wonder-working statue that Pope Gregory the Great had sent to Spain 800 years earlier. A church and later a basilica were built, helping to make the devotion to Our Lady of Guadalupe one of the most popular in all of Spain and a favorite Marian title of Christopher Columbus, who dedicated an island he discovered to her patronage.

This devotion predates the more famous Mexican one of the same name. The Virgin was also called “Our Lady of Guadalupe” in Mexico because—according to some explanations—the visionary St. Juan Diego called her Coātlaxopeuh meaning in his native Nahuatl “the one who crushes the serpent,” and to the Spanish ear that sounded like Guadalupe, an already familiar name.

In December 1531, the Blessed Mother appeared several times on Tepeyac Hill to Juan Diego (1474–1548), an indigenous Mexican convert to Christianity, requesting that a temple be built there in order to honor her Son. She comforted Juan in his doubt:

“Am I not here, I, who am your mother? Are you not under my shadow and protection? Are you not in the hollow of my mantle, the crossing of my arms? Am I not the source of all your joy? What more do you need? Let nothing else worry you, disturb you.”

His persistence in attempting to persuade the Spanish bishop-elect in Mexico to begin this great undertaking was received favorably only when during an audience the devout native unfurled his tilma (cloak), which contained Castilian roses blooming out of season in winter and was emblazoned with an image of the Mother of God in native garb.

The wondrous image on Juan Diego’s cactus-fiber cloak, which should have decayed within decades, remains to this day. Numerous copies have been made over the years to try to match its beauty and simulate its preservation. One copy, created in 1789, was painted on a similar coarse-fiber surface and placed in glass next to the tilma. It lasted eight years before the heat and conditions caused it to be taken down due to the fading of its colors and fraying of its threads.

Adolfo Orozco, a researcher and physicist at the National University of Mexico, sees no explanation for how the tilma remained intact despite having been “exposed for approximately 116 years without any kind of protection, receiving all the infrared and ultraviolet radiation from the tens of thousands of candles near it and exposed to the humid and salty air around the temple.”xxxvii

The tilma has survived more than the ravages of Mexico’s heat and humidity and the smoke of votive candles. In 1785, a worker accidentally spilled nitric acid solution onto a large portion of the image while cleaning the frame. It should have been eaten away almost immediately, but the image remains in good condition. In 1921, an anti-Church activist placed dynamite in a rose display at the altar of the Basilica of Our Lady of Guadalupe. When the explosion went off, the marble of the altar and floor were destroyed and the nearby metal crucifix mangled, but the image itself stayed intact.

It has become the most famous Marian image and belongs to a rare group of miraculous images classified as acheiropoeita (Greek, “not made from human hands”). One of the great mysteries of the Guadalupan image is how it was created. The image on the tilma is composed of pigments that have not been identified by chemical analysis as the product of animal, vegetable, or mineral dye. No under-sketch has been identified below the painting.

On May 7, 1979, Philip Serna Callahan, an accomplished biologist and author of fourteen books and 200 scientific papers, was invited to conduct infrared photographic tests on the tilma.

In terms of this infrared study, there is no way to explain either the kind of color pigments or the maintenance of color luminosity and brightness over the centuries.

When consideration is given to the fact that there is no under drawing, sizing or over varnish, and the weave of the fabric itself is utilized to give the portrait depth, no explanation of the portrait is possible by infrared techniques. It is remarkable that after more than four centuries there is no fading or cracking of the original figure on any portion of the agave tilma, which should have deteriorated centuries ago.xxxviii

Some have suggested that the image contains embedded symbolic meanings for both the natives and Spaniards who have encountered it, acting as a catechetical device. Our Lady’s pose, standing in front of the rays of the sun and on top of the moon and with the stars to her back on her mantle, suggests that she is greater than these celestial bodies, which were divine personages for the Aztec people. However, the eyes of the image are downcast and the head bowed, suggesting that the woman is not a god herself but standing humbly with hands in a prayerful posture before God. Even her feet are said by some to be in movement, portraying her as dancing in prayer.

Because of her dark skin and hair she is called la morenita (“the dark little one”), allowing the indigenous people to see her as one of their own. She is wearing a maternity belt to indicate that she is pregnant, and on her stomach is a glyph, the Nahui Ollin, a four-petaled flower indicating north, south, east, and west, or God in his omnipresence. Although every other glyph is repeated on her dress, this one is unique from any of the other arabesque designs in the image. As a result, she can be understood to be the Virgin Mother of God.

Study of the tilma by scientists and others has rendered some noteworthy discoveries. In 1981, Peruvian ophthalmologist Jose Aste Tonsmann published an analysis of high-resolution imaging that revealed in the pupils and corneas of the eyes of the Virgin on the tilma an image of thirteen people whose appearance is consistent with the moment of the story when the saint reveals the image to the bishop-elect and his attendants.

On December 22, 1981, at the Observatory Laplace in Mexico City, Fr. Mario Rojas and Juan Hernández Illescas, a medical doctor and amateur astronomer, analyzed the stellar arrangement that appears in the mantle of the Virgin. They concluded that the stars were consistent with what astronomers believe was in the sky above Mexico City on the day the apparition occurred: the winter-morning solstice of December 12, 1531, Saturday, at 10:26 a.m.

Our Lady of Guadalupe has become a symbol for the Mexican people, and millions of pilgrims, some traversing the plaza on their knees, visit her shrine annually. In his historic 1979 visit to the Basilica of Our Lady of Guadalupe in Mexico City, Pope St. John Paul II called her a “Star of Evangelization,” knelt before her image, invoked her motherly assistance, and called upon her as Mother of the Americas. From 20 Answers: Apparitions & Revelations