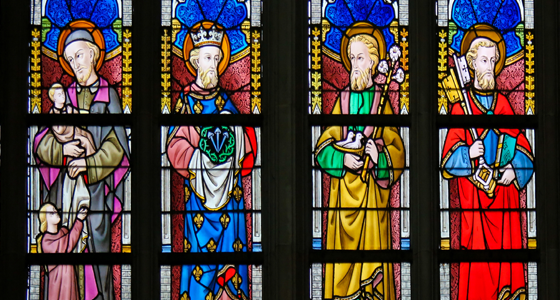 The answer depends on precisely what is meant by saint. If saint is taken to refer to simply being united to Christ (and thus a Christian), then the answer is baptism.

St. Paul teaches, “For by one Spirit we were all baptized into one body—Jews or Greeks, slaves or free—and all were made to drink of one Spirit” (1 Cor. 12:13, emphasis added). The one body Paul writes of here refers to the body of Christ (v. 27). Moreover, in Romans 6:3-5, he writes:

Do you not know that all of us who have been baptized into Christ Jesus were baptized into his death? We were buried therefore with him by baptism into death, so that as Christ was raised from the dead by the glory of the Father, we too might walk in newness of life. For if we have been united with him in a death like his, we shall certainly be united with him in a resurrection like his.

So baptism is the gate through which we are initially united to Christ and thus become saints, set apart unto him as members of his mystical body.

To become a canonized saint—someone whom the Church publicly declares “worthy of universal veneration”—there are three stages.

The first stage involves an examination of the life of a candidate for sainthood. Phase one of the examination is at the diocesan or eparchial level. The bishop of the diocese or eparchy in which the person died begins the investigation into the life of the candidate five years after the person’s death (unless the pope gives a dispensation), gathering information from witnesses establishing the candidate’s martyrdom or attesting to the virtues the candidate bore witness to in his life.

Phase two of the examination is carried out by the Vatican’s Congregation for the Causes of Saints, the beginning of which consists of a team of nine theologians examining the prepared Positio, which is a document the Congregation prepares summarizing the evidence gathered in phase one. If the majority of the assigned theologians agree that the evidence supports the martyrdom or the virtuous life of the candidate, then the Positio is handed over for examination to bishops and cardinals who are members of the Congregation. If they approve, then the entire cause is given to the pope for approval. If approved, the pope authorizes a decree declaring the candidate to be either a venerable (in the case that the person has lived a virtuous life) or a blessed (in the case that the person was martyred).

Stage two of the canonization process is what’s called beatification. A decree of beatification grants permission for limited public veneration, usually restricted to within the boundaries of “a diocese, eparchy, region, or religious community in which the blessed lived.”iii One miracle attributed to the candidate’s intercession is required for beatification unless the candidate is a martyr. When a candidate is beatified, he receives the title Blessed.

Stage three is the actual canonization. The condition for this stage is an additional miracle attributable to the intercession of the blessed. But it must be attributed to the blessed’s intercession after his beatification. With canonization, the individual is able to be publicly venerated throughout the universal Church, and he receives the formal title Saint.

This formal process wasn’t always the way things happened. For the first five centuries in the Church, instead of an official Vatican organ, it was the vox populi (voice of the people) that determined who was considered a saint.

Starting in the sixth century, it was the local bishop who oversaw the process of investigating the life of a person the people requested to be recognized as a saint. If the bishop approved of the person’s life, he would issue a decree and thereby canonize that person.

The usual steps involved with formal canonization by the pope began in the tenth century, with Pope John XV’s canonization of St. Ulric on January 31, 993 being the first recorded canonization. The rules and regulations governing the canonization of saints would be adjusted over the centuries, including adjustments made in the 1917 and 1983 Codes of Canon Law. The three stages described above, which come from the 1983 Code and new norms for the causes of canonization, are still in force today.

Did you enjoy this excerpt? Order your copies of 20 Answers: The Communion of Saints today!