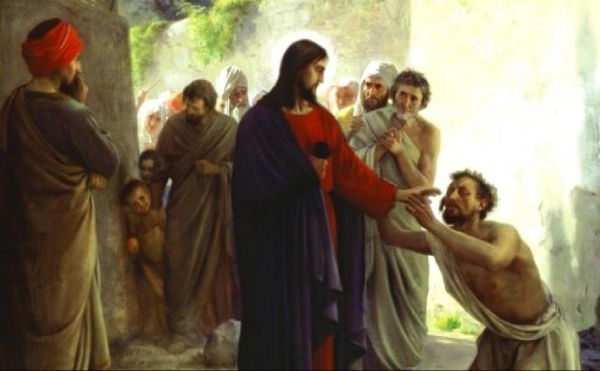 The parables Jesus told are filled with powerful secrets that reveal the mysteries of God’s kingdom.

In this excerpt, Fr. Walshe takes a look at the Gospel reading from last weekend, the fourth Sunday in Lent...

This passage about the man born blind is, like the passage about the Samaritan woman at the well, found only in the Gospel of St. John. It is also read in the Church especially during Lent, and it is particularly instructive for those preparing for baptism.

As Jesus passed by he saw a man blind from birth. His disciples asked him: “Rabbi, who sinned, this man or his parents, that he was born blind?” Jesus answered, “Neither he nor his parents sinned; it is so that the works of God might be made visible through him. We have to do the works of the one who sent me while it is day. Night is coming when no one can work. While I am in the world, I am the light of the world.” When he had said this, he spat on the ground and made clay with the saliva, and smeared the clay on his eyes, and said to him, “Go wash in the Pool of Siloam” (that means Sent).

So he went and washed, and came back able to see. His neighbors and those who had seen him earlier as a beggar said, “Isn’t this the one who used to sit and beg?” Some said, “It is,” but others said, “No, he just looks like him.” He said, “I am.” So they said to him, “How were your eyes opened?” He replied, “The man called Jesus made clay and anointed my eyes and told me, ‘Go to Siloam and wash.’ So I went there and washed and was able to see.” And they said to him, “Where is he?” He said, “I don’t know.”

They brought the one who was once blind to the Pharisees. Now Jesus had made clay and opened his eyes on a Sabbath. So then the Pharisees also asked him how he was able to see. He said to them, “He put clay on my eyes, and I washed, and now I can see.” So some of the Pharisees said, “This man is not from God, because he does not keep the Sabbath.” But others said, “How can a sinful man do such signs?” And there was a division among them. So they said to the blind man again, “What do you have to say about him, since he opened your eyes?” He said, “He is a prophet.”

Now the Jews did not believe that he had been blind and gained his sight until they summoned the parents of the one who had gained his sight. They asked them, “Is this your son, who you say was born blind? How does he now see?” His parents answered and said, “We know that this is our son and that he was born blind. We do not know how he sees now, nor do we know who opened his eyes. Ask him, he is of age; he can speak for himself.” His parents said this because they were afraid of the Jews, for the Jews had already agreed that if anyone acknowledged him as the Messiah, he would be expelled from the synagogue. For this reason his parents said, “He is of age; question him.”

So a second time they called the man who had been blind and said to him, “Give God the praise! We know that this man is a sinner.” He replied, “If he is a sinner, I do not know. One thing I do know is that I was blind and now I see.” So they said to him, “What did he do to you? How did he open your eyes?” He answered them, “I told you already and you did not listen. Why do you want to hear it again? Do you want to become his disciples, too?” They ridiculed him and said, “You are that man’s disciple; we are disciples of Moses! We know that God spoke to Moses, but we do not know where this one is from.”

The man answered and said to them, “This is what is so amazing, that you do not know where he is from, yet he opened my eyes. We know that God does not listen to sinners, but if one is devout and does his will, he listens to him. It is unheard of that anyone ever opened the eyes of a person born blind. If this man were not from God, he would not be able to do anything.” They answered and said to him, “You were born totally in sin, and are you trying to teach us?” Then they threw him out.

When Jesus heard that they had thrown him out, he found him and said, “Do you believe in the Son of Man?” He answered and said, “Who is he, sir, that I may believe in him?” Jesus said to him, “You have seen him and the one speaking with you is he.” He said, “I do believe, Lord,” and he worshipped him. Then Jesus said, “I came into this world for judgment, so that those who do not see might see, and those who do see might become blind.” Some of the Pharisees who were with him heard this and said to him, “Surely we are not also blind, are we?” Jesus said to them, “If you were blind, you would have no sin; but now you are saying, ‘We see,’ so your sin remains” (John 9:1-41).

The Context of the Conversation

The occasion for this account is that the disciples are wondering about the reason why someone could be blind from birth. They are operating on the premise that it must be a punishment, yet at the same time how could someone sin who was not yet born? So they immediately suspect the parents. The possibility of a sin that is passed on from the parents to their child at birth should remind Christians of the doctrine of original sin, a doctrine that will loom largely in the spiritual sense of the passage.

The Literal Sense of the Conversation

The passage begins with the words, As Jesus passed by he saw a man blind from birth. Jesus saw him, but he obviously did not see Jesus. And this is a theme throughout the passage: Jesus takes the initiative to enter into the life of someone who cannot take the initiative. What is more, the man born blind knows that he cannot take the initiative. As a careful reading of the passage will confirm, he is the epitome of the humble man, the one who knows he can do nothing without the help of others, whose only hope is in God. And yet it is this very humility that sounds more loudly in the ears of Jesus than the clamor of multitudes. Jesus seems to be drawn to him like iron to a magnet.

Right away the disciples ask Jesus about whose sin was the cause of his blindness from birth. On the one hand, it seems that someone should be punished for their own sins; therefore blindness must have been a punishment for his own sin. On the other hand, since he was blind from birth, it seems that he would not have had any opportunity to sin, so that his parents must be to blame. But Jesus responds by refuting their initial assumption: namely, that all physical evils are a punishment for sin. Rather, sometimes a physical evil is permitted by God to afflict even just men, such as holy Job, in order to bring about and manifest some greater good. And such was the present case. Jesus declares this man free from sin and reveals the real reason for his blindness: this man was born in darkness so that the light of God might shine upon the whole world.

Without further ado, Jesus performs a miracle: he gives sight to the man born blind. But the manner in which he effects the cure demands humility and obedience from the one who receives it. Jesus does not simply say, “Receive your sight.” No, instead he does something that must have been very humiliating for the blind man. He makes mud from his spittle and smears this mud in his eyes. Notice, there is no initial promise of a cure, just mud in his eyes and on his face, and the command to go wash in the pool of Siloam. The blind man accepts all this without a word of protest, a sign of his great humility.