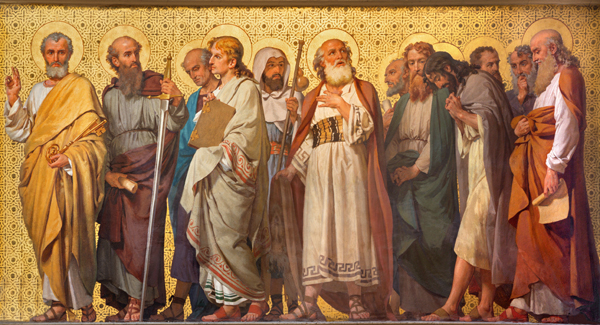 “Simon, Simon, behold, Satan demanded to have you, that he might sift you like wheat, but I have prayed for you that your faith may not fail; and when you have turned again, strengthen your brethren” (Luke 22:31-32).

In and of itself, this is a remarkable passage, although much is lost in translation. The Enduring Word biblical commentary remarks on this verse that “Satan wanted to completely crush and defeat Peter.” But this fundamentally misunderstands the verse.

It’s about Satan’s plan to crush and defeat not Peter, but all of them...or all of us.

The error here is simple. Unlike Hebrew and Greek, today’s English lacks a formal “you-plural.” As a result, we miss an important shift in Jesus’ words from you-plural to you-singular in this passage. Fortunately, there are still plenty of regional or slangy options: depending on where you’re from, you might use y’all, youse, yinz, you guys, you lot, or something else.

The passage is clearer if we plug in a you-plural so we can understand what’s going on. Now it reads, “Simon, Simon, behold, Satan demanded to have you all, that he might sift all of you like wheat, but I have prayed for you that your faith may not fail; and when you have turned again, strengthen your brethren.” Now we can see the important shift that’s obvious in the Greek but lost in the English—that Satan is out for all twelve (and, more broadly, all of Jesus’ followers), and that Jesus responds by praying for one of them, Peter, and then commissioning him to strengthen the others.

What might Protestants say in response to this passage? Keith Mathison, in The Shape of Sola Scriptura, writes that Peter:

. . . overestimates his own faith despite Jesus’ warning. That is an especially dangerous place for any believer to be, and therefore Jesus, because of his love for Peter, prays especially for him. . . . This text in Luke 22 is a beautiful picture of our Lord’s love and concern for Peter. It has absolutely no bearing on the question of the papacy.

To be sure, part of what’s going on here is that Peter’s going to deny Christ three times. But that doesn’t really explain the line “strengthen your brethren.” This isn’t as much exegesis as a hand-waving dismissal. The problem with Mathison’s read is clear from John Calvin’s commentary on the passage, in which he notes that all of the Twelve are described as making similar boasts, and all are described as falling away. “Peter said to him, ‘Even if I must die with you, I will not deny you.’ And so said all the disciples” (Matt. 26:35). Calvin rightly notes that the fact that they should do this even “after Peter had been reproved” shows “how little they knew themselves.” And Jesus warns that all of the Twelve, not just Peter, are about to fall away: “You will all fall away because of me this night” (31). Sure enough, after Jesus’ arrest, “all the disciples forsook him and fled” (56).

So why do we focus on Peter’s denial?

Two reasons. One is simply that Peter doubles back and “followed him at a distance” (Matt. 26:58), while most of the Twelve are nowhere to be found. Only he allows himself to be put into harm’s way again, either out of love of Christ or an overestimation of his own strength, or both. The second is that Peter is consistently held to a higher standard throughout the Gospels. When all of the Twelve fall asleep in the Garden, it’s only one who gets rebuked: Peter (Matt. 26:40; Mark 14:37). Jesus explains this principle expressly: “every one to whom much is given, of him will much be required; and of him to whom men commit much they will demand the more” (Luke 12:48). Why is more expected of Peter? Because more has been entrusted to him.