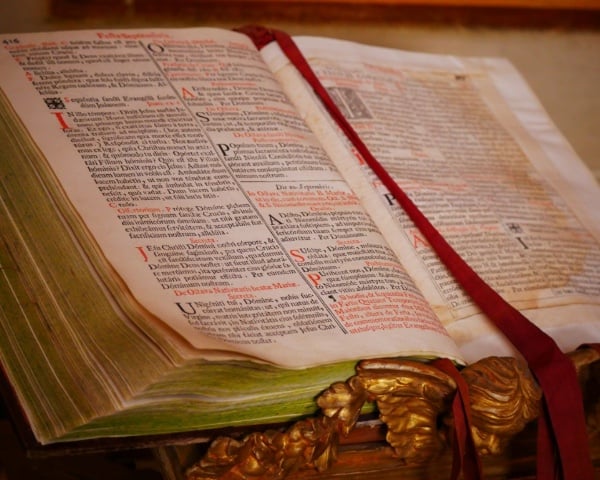 The Bible can be intimidating.

It’s a big, thick book—much longer than most books people read. It’s also ancient. The most recent part of it was penned almost 2,000 years ago. That means it’s not written in a modern style. It can seem strange and unfamiliar to a contemporary person. Even more intimidating is that it shows us our sins and makes demands on our lives.

No wonder some people hesitate to take the plunge and start reading the Bible!

But each of the things that can make it intimidating is actually a benefit:

• Because the Bible is so large, it contains a great deal of valuable information. If it were short, it wouldn’t tell us nearly as much.

• The fact that it was written so long ago testifies to its timeless message. Its teachings aren’t tied to just one time or culture. They have endured, and by reading Scripture we experience the joy of discovering the story of God’s dealings with mankind.

• Finally, it’s important that it reveals our sins to us. We need wake-up calls that shake us out of our feeble attempts to rationalize what we’re doing wrong. And Scripture is quick to assure of us God’s love for us. “For God so loved the world that he gave his only Son, that whoever believes in him should not perish but have eternal life” (John 3:16).

The Bible is an inestimable gift from God. It’s his word in written form—something each of us should cherish and study regularly.

Some groups of Christians try to claim the Bible for themselves. They make it sound like the Catholic Church is opposed to Scripture. Some even claim that the Church “hates” the Bible.

But as you’ll see, all Christians owe an enormous debt to the Catholic Church, for it was through the Church that the Bible was given to the world.

Jesus himself founded the Catholic Church. He appointed its first leaders, and they were the ones who—under the inspiration of the Holy Spirit—wrote the books of the New Testament, which completed and became the capstone of all the scriptures that had come before.

The Holy Spirit then guided the Catholic Church to discern which books belonged in the Bible and which did not. This involved the crucial process of sorting the true scriptures from all of the false ones that existed.

The Catholic Church laboriously copied the scriptures in the age before the printing press, when every book—including lengthy ones like the Bible—had to be written by hand. It thus preserved these books down through the centuries, unlike so many ancient works that have now been lost.

The Catholic Church is why we have the Bible today, and everyone should be grateful for the gift that, by the grace of God, it has given to the world.