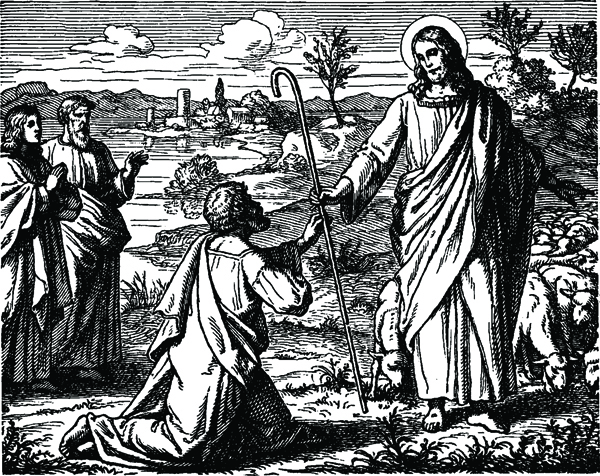 The next conversation I want to consider is that between Jesus and Peter on the beach after the Resurrection. It is the encounter of every sinner with Christ after his repentance.

[Jesus] said to him, “Feed my sheep. Amen, amen, I say to you, when you were younger, you used to dress yourself and go where you wanted; but when you grow old, you will stretch out your hands, and someone else will dress you and lead you where you do not want to go.” He said this signifying by what kind of death he would glorify God. And when he had said this, he said to him, “Follow me.” Peter turned and saw the disciple following whom Jesus loved, the one who had also reclined upon his chest during the supper and had said, “Master, who is the one who will betray you?” When Peter saw him, he said to Jesus, “Lord, what about him?” Jesus said to him, “What if I want him to remain until I come? What concern is it of yours? You follow me” (John 21:15-22).

The Context of the Conversation

The setting is telling. Chapter twenty-one begins with Peter going out to fish with some of the other apostles. They fish all night and catch nothing, and then Jesus appears in the early morning on the shore and tells them to cast the net on the other side, and they take in a miraculous catch. All this hearkens back to Peter’s original call to follow Jesus, when at first he had said “depart from me for I am a sinful man” (Luke 5:8). But now Peter jumps in the water and swims toward the Lord. At the beginning of his vocation Peter wanted to flee from Jesus out of fear, but now he longs to be united with Jesus out of love.

The Meaning of the Conversation: Peter Relives His Entire Vocation

The verses that follow continue to recapitulate Peter’s entire vocational history. Peter hauls in the fish, symbolizing his apostolic labors during the three years of following the Lord; he dines with Jesus, symbolizing the Last Supper; and after they dine they have this conversation on the shore, next to a charcoal fire.

Jesus said to them: “You will all fall away because of me this night; for it is written, ‘I will strike the shepherd, and the sheep of the flock will be scattered.’ But after I am raised up, I will go before you to Galilee.” Peter declared to him: “Though they all fall away because of You, I will never fall away.” Jesus said to him: “Truly I say to you, this very night, before the cock crows, you will deny me three times.” Peter said to him: “Even if I must die with You, I will not deny you” (Matt. 26:31-35).

All the same subjects come up: Peter loving Jesus more than the others; Peter following Jesus even unto death; the shepherd; the sheep. In that earlier conversation, Jesus had some very bleak and sad things to say on those subjects. The shepherd will be struck; the sheep scattered and shepherdless; Peter denying Jesus, loving Jesus even less than the others. Jesus foretold a tragedy, but Peter wrote his own script with a happy ending. Peter wanted a heroic epic in which he played the lead role. We know, of course, how things turned out...